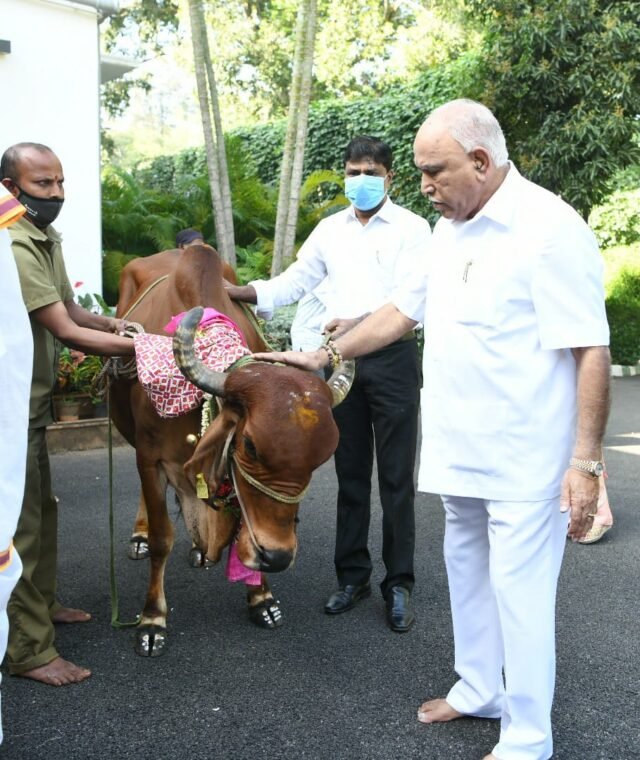 With the Karnataka legislative council getting adjourned sine die without taking up the contentious anti-cow slaughter bill passed by the Assembly, Chief Minister B S Yediyurappa on Friday said, the government will promulgate an ordinance to bring it into effect.

The Chief Minister also expressed reservations about the legislative council’s Chairman K Pratapachandra Shetty’s decision to adjourn sine die “abruptly”, and said that the government has decided to convene the house on Tuesday and also petitioned the Governor in this regard.

Shetty had on Wednesday set aside the BJP’s attempt to move a no-confidence motion against him stating that he was taking legal opinion on the matter, and had refused to include it in the agenda citing rules that the subject could be taken up only after 14 days after submission of notice of no- confidence.

Shetty was elected as the Chairman of the Council during the Congress-JD(S) coalition government.

Currently the ruling BJP is the single largest party in the Council with 31 seats, followed by Congress with 29 seats including the chairman.

The JD(S) has 14 seats and there is one independent.

According to sources, the ruling party’s move to convene the Council on Tuesday is aimed at taking forward the no-confidence motion against the chairman, with the help of JD(S).

“We will promulgate an ordinance (on anti-cow slaughter), you know that in the council the Chairman was not cooperating, so we will be promulgating an ordinance,” Yediyurappa told reporters.

The Chief Minister performed ”Gau Pooja” (cow worship) at his official residence Cauvery here on Friday morning in the backdrop of passage of the bill in the assembly.

It is known worldwide that in Hindu dharma cows are revered and in India, which is an agrarian country, and animal husbandry is a source of income for agriculturists, and cattle are used in farming activities, he said.

“As cows are considered an asset in the Indian culture, the Karnataka Prevention of Slaughter and Preservation of Cattle Bill has been passed by the state’s legislative assembly, which further strengthens the existing law,” he added.

The Bill was passed by the assembly on Wednesday, amidst din, with stiff opposition from Congress.

The legislative council was adjourned sine die on Thursday, and the bill is yet to be tabled there for passage.

For a bill to become law, its passage in the council, followed by assent by the Governor is necessary.

According to sources, the BJP government that had “hurriedly” tabled the bill and ensured its passage in the assembly on Wednesday did not table it in the council on Thursday sensing that the numbers were not in its favour with combined opposition-Congress and JD(S)- against it, and may refer it to the joint select committee.

Leader of the House and Minister Kota Srinivas Poojary stated in the upper house on Thursday that the bill can be taken up for discussion on Friday citing absence of the Minister concerned, when the Congress insisted for it in response to BJP’s demand that the no-confidence motion against the Chairman be taken up first.

Stating that as per the bill, cow slaughter will attract imprisonment of up to seven years and a fine of up to Rs 10 lakh, the Chief Minister said, it also provides for setting up special courts for dealing with related cases, along with protection for those who protect cows, and ban on inter-state transportation of cows for the sake of slaughtering.

He said that his government was committed towards strengthening laws aimed at protection of cows, and necessary arrangements will be made by setting up infrastructure where cows can be taken care of.

“Ninety per cent of the state’s people are happy with the bill, we had said in our election manifesto (about anti- cow slaughter law). Earlier (in previous BJP tenure) we had brought in legislation against cow slaughter, but it was not given assent then. Now we are bringing it to effect once again,” he added.

Ever since the BJP came back to power in the state, several party leaders have been making a pitch to re-enact the anti-cow slaughter law.

The party’s state executive had adopted a resolution to this effect.

State’s Animal Husbandry Minister Prabhu Chavan along with officials, had travelled to Uttar Pradesh and Gujarat to study and gather information regarding implementation of the laws there, before bringing the bill to assembly.

Responding to a question that the council was abruptly adjourned without completing the agenda, Yediyurappa said, it has now been decided to convene the council on Tuesday and the Governor has also been petitioned in this regard.

“The council chairman doesn’t have the powers to abruptly adjourn the house (sine die). It was decided at the Business Advisory Committee meeting to conduct the session till Tuesday or Wednesday and the Chairman was personally present at those meetings, still he has abruptly adjourned, which is not right,” he added.

The BJP has claimed that the chairman adjourned the house sine die despite its insistence to conduct the proceedings as scheduled and take up the no-confidence motion against him.

Law and Parliamentary Affairs Minister J C Madhuswamy stating that the plan was actually to conduct the council proceedings till December 15, has said that it was decided to adjourn only the assembly sine die on Thursday and not the council. PTI

Its official: Bengaluru to have 243 wards