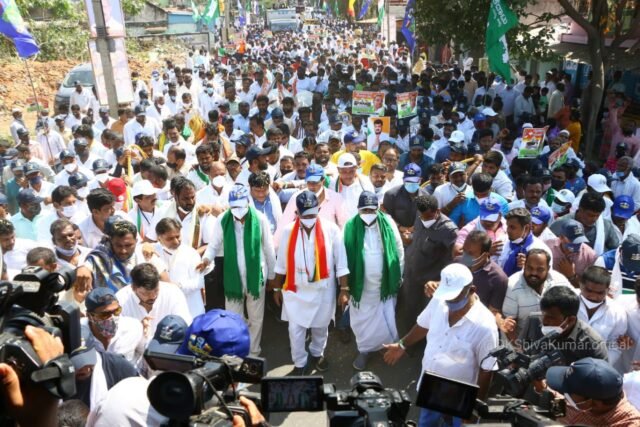 As the Congress’ ‘padayatra’ demanding implementation of the Mekedatu project across the Cauvery river entered its fourth day on Wednesday, a third FIR has been registered against 64 party leaders, including D K Shivakumar and Siddaramaiah, for taking out the march defying COVID-19 curbs.

The FIR has been registered at the Kanakapura police station for defying restrictions on Tuesday, during which Congress leaders and a large number of party workers had marched a distance of about 14.3 km from Kanakapura to Chikkenahalli.

They have been booked for violation of guidelines, by gathering in huge numbers, without wearing face masks and not maintaining social distancing, under the Karnataka Epidemic Diseases Act and sections of Indian Penal Code, the FIR said.

This even as the Congress’ 10-day long padayatra demanding for implementation of Mekedatu project, to which neighbouring Tamil Nadu is opposed to, continued for the fourth day on Wednesday for a distance of about 15 km from Chikkenahalli to Ramanagara with participation of hundreds of party workers and supporters.

Meanwhile, the Karnataka High Court on Wednesday questioned the state government as to why it allowed the Congress’ padayatra, which is being held in violation of its COVID curbs, and why no appropriate action was taken by the authorities to restrain the march.

It has also asked the Karnataka Pradesh Congress Committee (KPCC) whether it had obtained permission for the padayatra and whether measures have been taken in compliance with Standard Operating Procedures (SOPs) prescribed by the government to prevent the COVID-19 spread.

The court has asked both the state government as well as the Congress
to respond by Friday.

While the first FIR filed at the same Sathanoor police station for defying restrictions on Sunday had named 30 people including senior Congress leaders like Shivakumar, Suresh, Siddaramaiah, Veerappa Moily and Mallikarjun Kharge, among others; the second FIR is against 40 party leaders for defying orders on Monday.

The padayatra spanning a distance of nearly 139 km is scheduled to conclude at Basavanagudi in Bengaluru on January 19. PTI