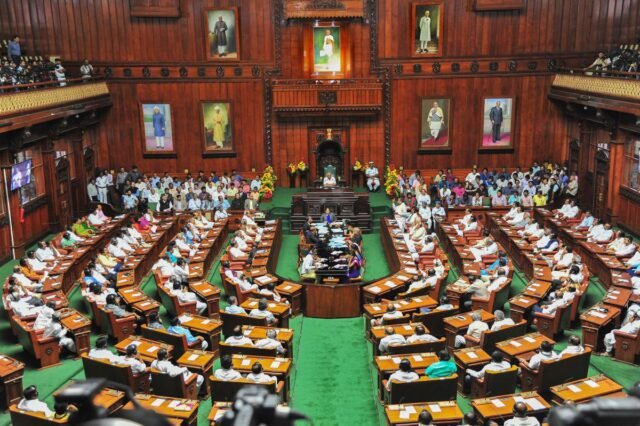 The Karnataka Legislative Assembly on Saturday passed amendments to the land reforms act that liberalised farmland ownership, despite opposition Congress strongly opposing it, with some party members tearing copies of the bill, and staging a walkout calling it a “black law.”

The contentious Karnataka Land Reforms (Second Amendment) Bill, 2020 that further amends the act of 1961, removing almost all restrictions on buying farm lands was passed by the assembly with a voice vote.

The bill passed today replaces an ordinance to this effect promulgated by the government in July.

It also makes certain amendments to Section 80 and states that the Class-A irrigated land (irrigated with water from a dam) can be used only for agricultural purposes.

It also inserts a new Section 80 (A) which states that no conditions laid in this act shall be relaxed in respect of lands granted to persons belonging to the SC/STs, during the period of prohibition under the Karnataka SC and ST (Prohibition of Transfer of Certain Lands), Act, 1978.

Commending the bill for the consideration of the House, Revenue Minister R Ashoka, however, at the last moment withdrew amendment to Section 63 mentioned in the bill, that raised the cap on ownership of farmland.

“We will retain what is there in the original act, following the suggestion from members, I am bringing that amendment to the bill..ceiling for a family of four will remain 54 acres and for a larger family, it will be 108 acres,” he said.

The government in the bill had proposed to increase the ceiling from 10 units (one unit of land is 5.4 acres) to 20 units for a family up to four people, and from 20 units to 40 units for large families above five people.

Farmers” organisations and opposition parties had expressed concern that an increase in the ceiling would enable large corporates to buy land in bulk, which will be detrimental to farmers and rural economy.

Noting that the amendments have been brought as the sections were not helpful to farmers, the Minister, speaking on the bill, said it was being used to harass farmers and others.

He said the bill will help those interested in agriculture but don”t belong to agrarian families to do farming.It will also help in bringing in new techniques and modernise agriculture, increase production of foodgrains and agriculture exports.

Leader of the Opposition Siddaramaiah, alleging that the government has brought this amendments in haste, said it is a deathknell to farmers.

He pointed out that farmers are holding protests against the bill and have called for Karnataka bandh on September 28. The bill will destroy rural life and rural economy, especially small and marginal farmers, and also cause scarcity of food in the future as anyone including industries, recreation business, among others, can buy land,he claimed.

He alleged the government has colluded with corporate bodies and housing societies and claimed about 13,814 pending cases on violation of 79(A) (B) sections related to thousands of acres of land worth crores of rupees, would be dismissed with the passage of this bill.

JD(S) leader H D Kumaraswamy said there were shortcomings with regard to Section 79(A) and (B) and he too personally had faced problems in purchase of agriculture land because of it.

“I assure that nothing will happen to even an acre of their land…,” he said. Bedlam prevaliled when Minister Ashoka stated that the Congress government in the past had favoured amendments to land reforms act and the then cabinet”s subcommittee had even made recommendation to this effect. Congress members took strong exception to his statement, with few of them even tearing copies of the bill and throwing it in the air inside the House.

Congress members then staged a walkout, following which the bill was passed by a voice vote.

Farmers organisations too have been protesting outside the House against the passage of this bill. (PTI)

Covid-19: No Holidays For Health Staff

Cholera in a time of Covid-19!