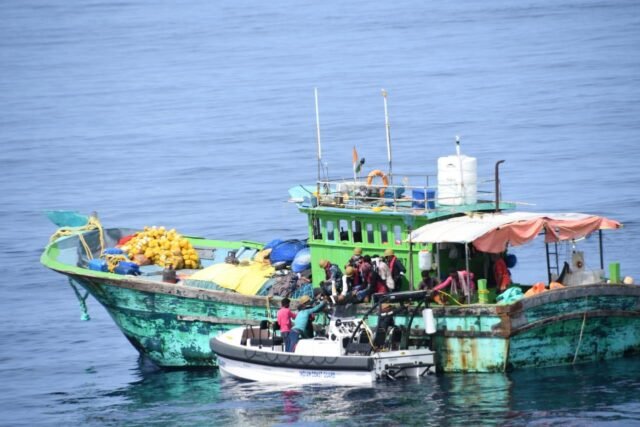 The Indian Coast Guard (ICG) rescued 11 fishermen 140 miles west off new Mangalore from a fishing boat which had a fire onboard.

According to the ICG, a message was received by Maritime Rescue Co-ordination Centre (MRCC) stating that a TN fishing boat had a massive fire due to a cylinder burst onboard IND – TN-15 -MM-5297 name IFB AVKM.

“Apparently, the fishing boat had 11 fishermen crew onboard. MRCC Mumbai immediately swung into action and diverted Two Offshore Patrol Vessels namely Sachet and Sujeet patrolling in area for immediate assistance. In addition, ISN was also activated to seek assistance from passing by Merchant Ships to which two merchant ships responded. However, the ICG with State of Art ship proceeded to datum with maximum speed within 3 hr from the time the message was received,” read the release.

The timely and swift action by #IndianCoastGuard, today, saved the precious life of fisherman who was in distress due to cylinder blast and fire engulfed on fishing Boat; The distressed fishing boat was approx. 140 nautical miles West Off New Mangalore.@IndiaCoastGuard pic.twitter.com/Vck3XVubFG

“At 1115 h, CG Dornier spotted the fishing boat in approximate position 140 nautical miles West off New Mangalore. A two-way communication was established on VHF Channel with fishermen to ascertain the casualty status and be of moral support to the Fishermen,” the release said.

“ICGS Sachet and Sujeet reached the datum at 1300 h on January 10 and immediately assessed the casualty and evacuated the severely injured and administered medical management. Braving the high seas, the ship headed for New Mangalore for further specialised hospital management in respect of the casualty. (ANI)