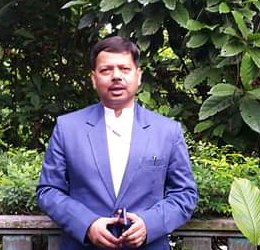 Calls them ‘heroes’ for offering to donate plasma

The state government has served a show-cause notice to IAS officer Mohammad Mohsin, asking why disciplinary action should not be taken against him for a controversial tweet on the Tablighi Jamaat religious group.

On April 27, Mohsin tweeted:”More than 300 Tablighi Heroes are donating their plasma to serve the country in New Delhi only. What about? #Godi Media? They will not show the works of humanity done by these heroes.”

The tweet is seen as trying to present the controversial Islamic group in a good light after some of its members who have recovered from Covid-19 reportedly offered to donate their blood for the purpose of plasma therapy for active Covid-19 patients.

Mohsin was in the news last year too after the Election Commission suspended him for trying to ‘inspect’ Prime Minister Narendra Modi”s helicopter during the PM’s visit to Odisha in April. The officer had then been deployed as a poll observer in that state.

A 1996 batch IAS officer of the Karnataka cadre hailing from Bihar, Mohsin is currently Secretary in the Backward Class Welfare Department.

“The adverse coverage this tweet has got in the media has been taken note of by the government, given the serious nature of COVID-19 and the sensitivities involved,” the notice says.

The government has sought a written explanation from the officer within five days, and has warned of action against him as per the All India Services (Discipline and Appeal) Rules, 1969 if he fails to do so.

The Tablighi Jamaat has been in the eye of a storm ever since thousands of its members tested positive after attending a mass meeting in Nizamuddin  in New Delhi in March.

Some estimates say the infected TJ members —  including foreign nationals who had violated their visa conditions — who fanned out across the country after the event are responsible for anything up to 30 per cent of the total corona virus infections in India.