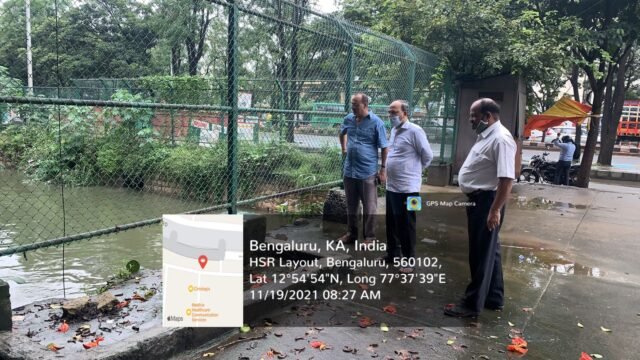 The torrential rains that have been lashing Bengaluru city for the last two to three days have not only upended the daily life of the ordinary citizen but have also not spared the upper strata of society. Karnataka’s former top bureaucrat, TM Vijay Bhaskar, had a taste of Nature’s fury on Friday when rainwater gushed into the basement of his residence in HSR Layout

Bhaskar, during his stint as Karnataka Chief Secretary, and even when he was the BBMP Administrator, was known to work pro-actively to solve the problems of common citizens. He was not one to confine himself to an air-conditioned office and was regularly seen in the field till his retirement 11 months ago.

The former Chief Secretary, who stays in HSR Layout, Sector 4, had a sleepless night as water from the neighbouring park entered his basement and also those of several neighbouring houses in his lane. Sources said the water overflowed from the storm water drain close to the Outer Ring Road, entered the park and then flooded the basements.

Sources told TheBengaluruLive that after coming to know that water had gushed into his basement, Bhaskar called Bommanahalli zone’s Executive Engineer Sheshadri at 5.20 am on Friday and politely asked him to visit the spot.

Sheshadri, with his team of officials and fire engines, rushed to the spot and pumped out the water from the basements and the neighbouring park into the storm water drain.

In fact, Bhaskar personally monitored the work by the civic staff, much to the relief of several residents of HSR Layout.

Covid-19 Vaccination: More than 80 lakh people above 18 registered on Co-WIN