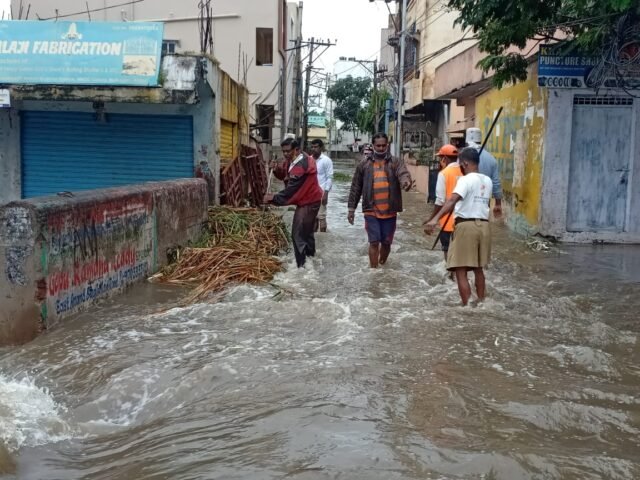 Heavy rains in North Karnataka, Kalyana-Karnataka and Mumbai-Karnataka regions have thrown normal life out of gear besides causing devastation to standing crops in thousands of acres of land.

Besides, hundreds of houses were either destroyed or damaged due to torrential rain lashing the region for the last four days.

IMD has sounded Red, Orange and Yellow alerts indicating continuation of rain for the next two days in parts of Karnataka where people were forced to spend sleepless nights since onset of the rain caused due to depression developed in Bay of Bengal.

According to the Karnataka State Natural Disaster Monitoring Centre (KSNDMC) sources all major dams in the Cauvery and Krishna basins are brimming and their floodgates were opened once again. Kalaburagi, Yadgir and Bidar were the severely affected districts as small streams were in spate with many lakes overflowing and inundating villages. In Chincholi Taluk of Kalaburagi district, the stop- gates of Nagarala and Chandrampalli lakes were opened, flooding the nearby villages. Normal life was paralysed due to heavy rains resulting in the overflowing of a major lake in Aland Taluk of Kalaburagi district. Due to torrential rain in Yargol village in Yadgir district, water gushed out of the weir of the lake resulting in damage to the crops and water-logging.

The recent rain, which was excess that normal in many rural areas, is not giving any room for the farmers to recover from the earlier devastation. The devastation may not be mainly due to rain but also man made as more than 90,000 cusecs water was released from Almatti which received heavy discharge from Koyana reservoir in Maharashtra two years back. Since then farmers are finding it hard to recover from nature’s onslaught.

Farmers were left with no option but to wait for rain to stop and sun to shine to recover themselves from the devastation caused due to natural calamity. Flood like situation is continuing for last three days. Many have to build their houses after rain stops.

Despite sorry picture prevailing in rural areas, the government is yet to come to their rescue, according to those suffering no officers or elected representatives have come to the scene to listen to their hardship.

Official sources told that “we are fully prepared to meet the challenges. Our boats are ready and experts are gearing up to take up rescue operation immediately. (Agency)

Pujas and homas before DKS’s crowning