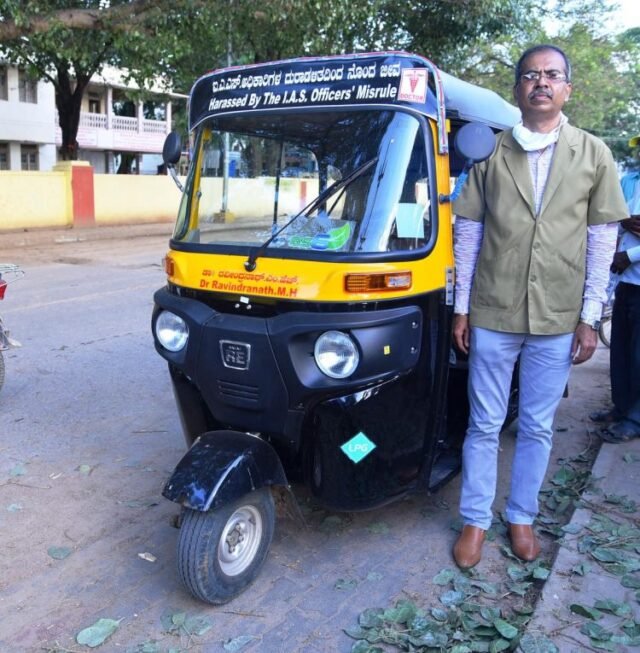 Despite KAT order, he has not been given suitable posting

A government doctor tired of being sent from pillar to post for his salary and a proper posting, despite a court verdict in his favour, has out of desperation become an autorickshaw driver.

Dr MH Rabindranath of Mahalakshmi Layout near Kundavada holds senior IAS officers responsible for his plight. To draw the attention of the public, he has inscribed on the front of his autorickshaw, ‘This life is hurt by IAS officers’.

He alleges that when he was working in Ballari, he pointed to a recruitment irregularity, and his senior, IAS officer Dr KV Rajendra, was annoyed and started harassing him.

Dr Ravindranath alleges that while he was working as District Vaccine Officer, Ballari, he was suspended on June 6, 2019 on a charge of non-availability of tender evaluation documents. He says he was targeted for the wrongdoing of a clerk in the gram panchayat office.

He approached the Karnataka Administrative Tribunal and got a verdict in his favour. He was then assigned to a taluk hospital in Sedam of Kalaburagi district, and once again approached the KAT.

Dr Ravindranath alleges that he has not yet been given any posting, and says he is ‘tired’ of being harassed by senior officers.

He says, ”I drive an auto for a living. Having served 24 years. I should be given a district-level assignment as per the court’s order.” He has once again approached the court for a contempt of court ruling.