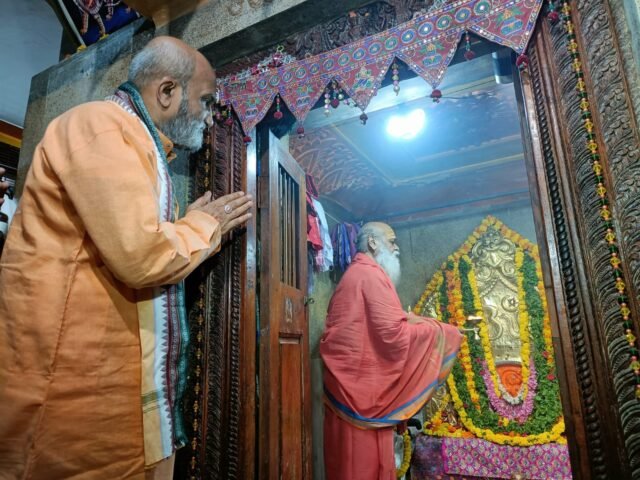 The Karnataka government on Monday gave directions for strict implementation of the Supreme Court order regarding use of loudspeakers at mosques for ‘azaan’ even as some Hindu groups launched a campaign against its use across the state early morning.

Even though Chief Minister Basavaraj Bommai categorically stated that the government will be issuing a set of directions for the implementation of the orders on the lines of guidelines put out in Uttar Pradesh, the Hindu outfits have said they will continue with their campaign until the changes are seen on the ground.

”So, it has been decided to follow the Supreme Court, Government of India and state government’s orders. Details on implementation, authorities for it like DySP and above rank officials are all mentioned in the order. It also mentions the need to take permission for those who want to use loudspeakers throughout the year,” he told reporters after a meeting.

A section of Congress’ Muslim leaders met Bommai over the issue, and asked him to take necessary steps and precautionary measures to maintain peace and tranquility in society.

Earlier in the day, Hanuman Chalisa, Suprabhata, Omkara and other devotional songs were played at temples in different parts of the state as part of a campaign by Hindu groups, including Sri Rama Sene, alleging failure on part of the government to take action against loudspeakers installed at mosques.

Recorded versions or bhajans being recited by those present at the temples were played out at around 5 am to counter the morning azaan being recited on the loudspeakers.

There were reports of such incidents at temples in various places including Bengaluru, Hubballi, Belagavi, Mysuru, Chikkamagaluru, Yadgir, Mandya and Kolar among other places.

At places including in Bengaluru, some Hindu activists were detained by the police.

Noting that the government will be issuing a set of directions for the implementation of these orders, the Chief Minister said everyone should abide by it and no one should take law into their hands. ”Things will be fine, if everyone abides by the order. It is the same set of rules that are being followed in Uttar Pradesh and other places, we are implementing it,” he added.

Sri Rama Sene chief Pramod Muthalik, who participated in early morning prayers at Anjaneya temple in Mysuru, said their campaign is against the government and the ”adamant” Muslim community.

”For the last one year, we have continuously been warning about the issues caused by the loudspeakers, disturbance to society, students and patients. We had also told Muslims, but nothing changed, no action was taken other than issuing notices. It was a drama. Even today, mosques have not stopped playing loudspeakers at 5 am,” he said.

Stating that the sound of azaan during the other four times of the day is not being reduced in accordance with permissible limits, he said, ”Our fight has only begun today. If still no action is taken, we will file a contempt petition in the High Court as it violates Supreme Court orders…This is not Taliban rule, Pakistan or Afghanistan. This is India, there is a constitution and rule of law here.” Sri Rama Sene had earlier warned that it will counter morning azaan with Hanuman Chalisa or Suprabhat or Omkara and devotional songs on May 9 if the government did not take action against loudspeakers installed at mosques.

Meanwhile, Home Minister Araga Jnanendra said strict action will be taken in accordance with the court orders to control any activities that cause noise pollution.

”Everyone should abide by the court orders,” he said in a statement adding that the government will not hesitate to take strict action against those taking law into their hands.

Earlier, Karnataka Congress’ Muslim leaders met the Chief Minister and asked him to take necessary steps and precautionary measures to maintain peace and tranquility in the society.

Congress’ deputy leader in the Assembly U T Khader, who led the delegation to meet the chief minister, maintained that the noise pollution issue should not be linked to any religion or community, and the government should formulate rules to implement the court orders, which everyone should abide by.

Stating that maintaining law and order is the responsibility of the government, Leader of Opposition in the Assembly Siddaramaiah said, ”If they can’t do it, let them quit.” Calling the people who have started this campaign as ”terrorists”, B K Hariprasad, Leader of the Opposition in the Legislative Council, said they should be booked under the stringent Unlawful Activities (Prevention) Act.

JD(S) leader and former chief minister H D Kumaraswamy demanded that people like Pramod Muthalik should be put behind bars. ”There are issues like price rise and others that concern people, importance should be given to it, not this (campaign).” PTI

Sabarimala: Devotees to be allowed from Nov 3