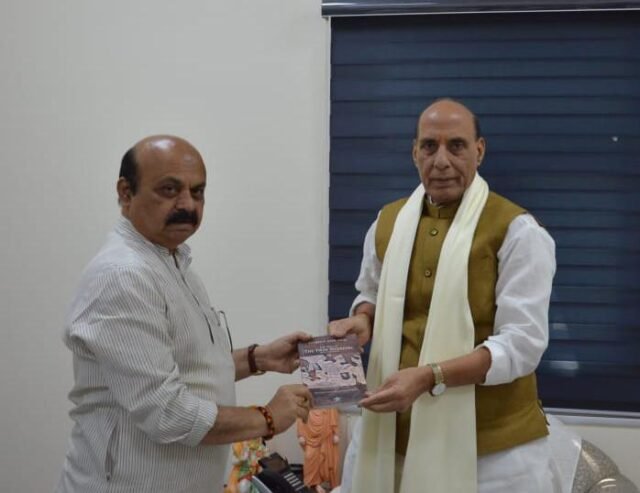 Karnataka Chief Minister Basavaraj Bommai on Wednesday said Defence Minister Rajnath Singh has responded positively regarding transfer of 700 acres of land in Belagavi, which is currently under the control of the latter’s ministry.

The state government needs this land for an IT park, which it intends to develop in Belagavi.

The issue was raised during the Chief Minister’s meeting with the Defence Minister in New Delhi on Wednesday.

The state government needs this land for the IT park, he said, adding, ”So, we have requested the Defence Ministry to hand over the land”.

Met with the Hon’ble Defence Minister Shri @rajnathsingh ji at New Delhi and discussed over aspects of Development. pic.twitter.com/NzB0OVP0A9

The Union minister has stated that he would discuss the issue with officials concerned and take a decision,” Bommai said.

Regarding extending the term of Sangolli Rayanna Military School in Belagavi, the Chief Minister said the Defence Minister has extended the term, and he has been invited to inaugurate the school.

Speaking to reporters, Bommai also said Union Minister for Chemicals and Fertilisers Mansukh Mandaviya has assured that there would not be any shortage in supply of DAP (di-ammonium phosphate) and urea to Karnataka.

The CM had met Mandaviya on Tuesday and discussed about supply of fertilisers needed for Karnataka.

”I have conveyed the need for DAP and urea for the Kharif season. There were doubts about proper supply of ammonia and other fertilisers as there is a shortage in the international market,” Bommai said.

”However, the Union Minister has assured that DAP would be made available. Transport arrangements need to be made once it reaches Karwar and Mangaluru ports,” the CM added. PTI

Miscreants will be dealt with iron hand, says Karnataka CM after statues were targeted