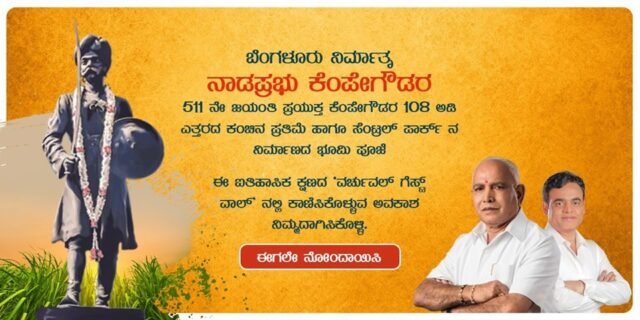 The ‘bhoomi puja’ for the construction of the 108-foot-tall bronze statue of Nadaprabhu Kempegowda in front of the international airport  will be performed by Chief Minister B S Yediyurappa on June 27. The day is also the 511th ‘jayanti’ of the ‘founder’ of Bengaluru.

Ram Sutar, the noted sculptor who built the statue of Mahatma Gandhi in Bengaluru, will execute the Kempe Gowda statue in bronze.

It is believed that Kempegowda, ran four bullock carts in four directions,  thereby marking the boundaries of the old fort city.  He is also credited with having designed an inter-linking system of water tanks for the city.

A 23-acre park around the statue will provide vignettes of the legacy of Kempegowda. The entry to the park will be accentuated by two high walls framing the statue, and reminiscent of the mud fort walls built by Kempegowda.

Four prominent pavilions will signify the four watchtowers that marked the boundaries of the old city. Curated information boards and murals will depict major events from the life of Nadapraphu Kempegowda.

PM, congratulates all those inducted in Council of Ministers