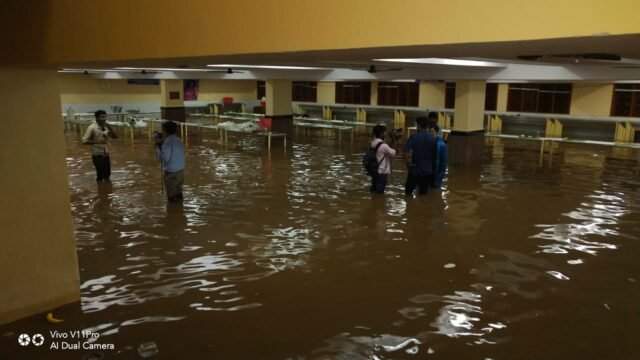 Back to rain misery in Koramangala 4th Block, 80 Feet Road

Tuesday’s overnight heavy rains lashed much of Bengaluru, resulting in many localities being inundated an roads waterlogged. Parts of the tech city recorded as much as 75 mm of rain.

Speaking to theBengaluruLive, BBMP Commissioner N Manjunatha Prasad claimed that no untoward incident has been reported from any part of Bengaluru city, apart from a few inundated areas where the water was drained out.

The India Meteorological Department (IMD) has issued a yellow alert for Bengaluru as the city continues to witness heavy rains.

The Karnataka State Natural Disaster Monitoring Centre (KSNDMC) reported that areas in western and southern Bengaluru received between 11 mm and 75 mm of rainfall.

The heavy rains poured into Meenakshi Kalyana Mantapa in Rajarajeshwari Nagar, leaving those who had come to attend a marriage ceremony stranded and submerging resulting the basement of the marriage hall. Food items, chairs and gas cylinders could be seen floating in the water.

The underpass at Shivananda Circle was inundated with more than 2 feet of water, causing cars to stall.

CS Patil, regional director of the IMD, said heavy rainfall is likely over Bengaluru. Clouds are moving at speeds of 5.8 km per hour. A yellow alert for Wednesday and Thursday has also been announced in several districts, including Shivamogga, Dharwad, Davanagere, Tumkur, Koppal, Bagalkot and Ballari.

Is CM hinting at longer lockdown?

Yediyurappa, Siddaramaiah to be discharged soon