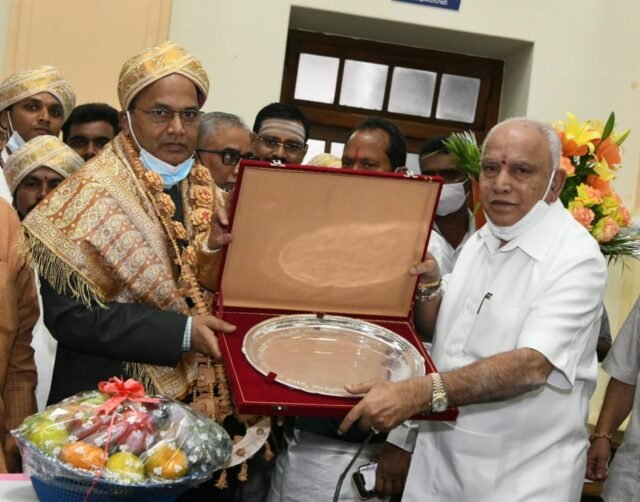 Bhaskar, who retires on Dec 31, will be remembered as the ‘official face’ of Karnataka’s fight against Covid

Sources say the most likely choices for the top bureaucrat’s post are P Ravi Kumar and Vandita Sharma; but CM will take final call

It’s goodbye to Karnataka’s seniormost IAS officer, Chief Secretary TM Vijay Bhaskar. He turned 60 on Monday and will retire on December 31 after a 37-year stint in Karnataka, and two-and-a-half years in the top civil servant’s post. Chief Minister BS Yediyurappa felicitated him on the occasion of his birthday — a possible hint that Bhaskar will not get an extension. Bureaucrats come and go, but Vijay Bhaskar will remain for a long time in the recollections of today’s adult generation as the officer who spoke — and signed off — on the state government’s Covid-fighting directives for much of 2020.

Speculation is now rife in IAS circles over the choice of Bhaskar’s successor to the top post. The next in line in terms of seniority, P Ravi Kumar (1984 batch), is considered a ‘probable’ candidate for the post but sources say that 1986 batch Vandita Sharma’s name is also being considered.

However, the sources told thebengalurulive that selecting an IAS officer for the post of Chief Secretary is at the discretion of the Chief Minister, and he will likely take a final call on the choice in a day or two.

In the current set-up, Ravi Kumar is the seniormost in the service list, and if the Chief Minister selects him for the Chief Secretary’s post, Vandita Sharma will be almost a sure shot for the post when Ravi Kumar retires in May 2022.

Interestingly, these speculations in Karnataka’s IAS circles have arisen after Ravi Kumar was moved out of the Chief Minister’s office 6 months ago due to a misunderstanding between Yeddyurappa and him, the sources said.