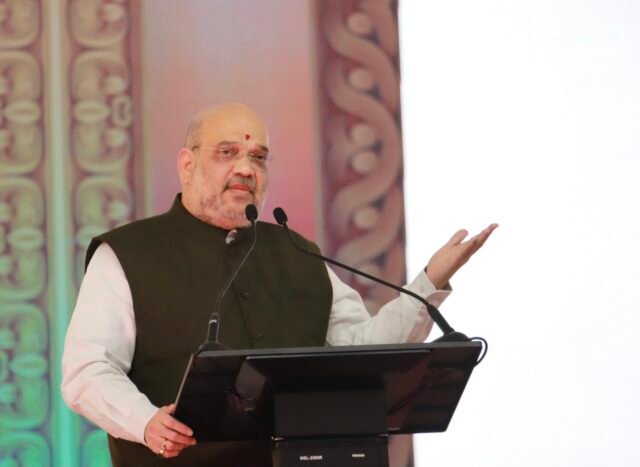 Exactly a month after setting a target of 150 seats to Karnataka BJP for 2023 assembly polls, Union Minister Amit Shah will be once again visiting the state on Tuesday, this time amid buzz over possible changes in the leadership, and pressure to rejig or expand the cabinet.

He had last visited the state on April 1 and attended the state BJP core committee meeting, during which the target was set and discussions were held on induction of leaders from other political parties ahead of elections, and strengthening the organisation.

Though largely seen as an official visit, with less than a year for elections, Shah during this trip is likely to meet senior party leaders including Chief Minister Basavaraj Bommai, veteran leader B S Yediyurappa among others, and assess the preparations by the party for the polls.

According to reports, the leaders are likely to meet over a lunch.

“He (Shah) is coming, I will be meeting him. He will try to know about the political situation in the state. As state elections are ahead, Prime Minister and Amit Shah have decided to give priority to Karnataka. He is likely to give suggestions on reaching the 150 seats target that we have set for the next assembly polls,” Yediyurappa told reporters in Shivamogga.

However, according to his schedule that is available there is no mention of any meeting with party leaders.

Shah, who will be landing in the Bengaluru late tonight, and is scheduled to take part in several events including valedictory function of ‘Khelo India’ University Games on Tuesday, will also pay tributes to 12th-century social reformer and Lingayat saint Basavanna on the occasion Basava Jayanthi.

Lingayats are a dominant community who have significant presence across the state and are considered as the strong vote bank of the BJP.

Other events he is scheduled to attend are inauguration and foundation stone laying of various projects including Nrupathunga University, E-inauguration of Forensic Science Laboratory in Bellari, inauguration of Bengaluru NATGRID Campus among others.

Bommai, who is under pressure to expand or rejig his cabinet at the earliest, ahead of the assembly polls, has already indicated that he would try to discuss it with Shah during this visit.

With polls scheduled next year, there is pressure mounting on the CM to expand or reshuffle his cabinet soon, after the recent assembly elections in five states.

With the cabinet exercise taking time, voices of discontent seem to be brewing within the ruling BJP, as party MLA M.P. Renukacharya recently had openly expressed displeasure about the delay and working of few ministers.

The MLA, who is also the CM’s political secretary, said several party legislators are of a similar opinion and they feel that if new faces are inducted into the cabinet, they would work aggressively and bring a good name to the BJP and the government ahead of the 2023 assembly polls.

There are currently five positions vacant in the state cabinet, which has 29 ministers including the chief minister, against the sanctioned strength of 34.

Some legislators have even been advocating a Gujarat-like overhaul of the Karnataka cabinet soon, to make way for new faces, ahead of the assembly elections.

The cabinet exercise will be crucial ahead of the assembly elections, in which the saffron party aims to return to power once again, and has set a target of winning a minimum of 150 seats in the 225-member House.

The visit also comes amid a fresh round of speculation about leadership change in the state.

BJP national general secretary B.L. Santhosh’s statement on Sunday that the party’s strength lies in the induction of new faces has set off this fresh round of speculation over leadership change in the state.

However, a senior BJP functionary said the party was unlikely to replace Bommai, who replaced veteran leader Yediyurappa as Chief Minister in July last year, and too much is being read into Santosh’s statement.

Yediyurappa too on Monday had dismissed such speculations, saying Bommai was doing a “good job.”

There have also been rumors for some time now that the state BJP president Nalin Kumar Kateel, an MP might be replaced.

The visit of Shah comes after the state witnessed a series of incidents of communal flare ups, 40 per cent commission allegation against the government, resignation of senior minister K.S. Eshwarappa following the alleged suicide of a contractor naming him, and alleged scam in the recruitment of police sub-inspectors among others.

With opposition parties cornering his government on all these issues, Bommai had recently said, the BJP will reach out to the people for Assembly elections with positive politics and its report card on positive governance.

This was after BJP central leadership asking leaders of its Karnataka unit and ministers to bring the developmental agenda to the fore and showcase the achievements of the government in view of the polls, amid flare-up in communal issues in the state. PTI

Karnataka sets up committee to get Forest Department clearance for projects