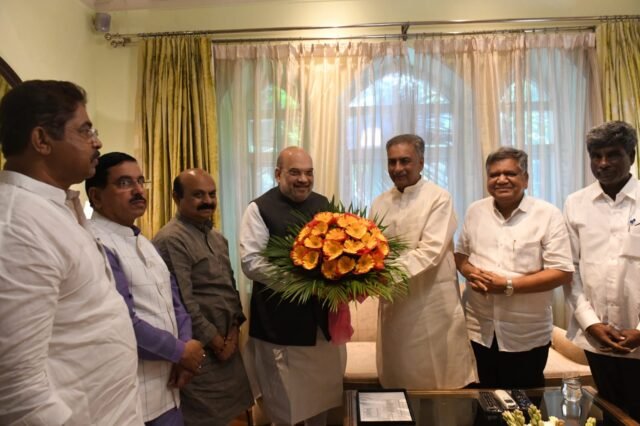 He is likely to be the BJP’s candidate for the upcoming MLC polls from West Teachers’ constituency.

”I will be resigning soon as Chairman of the Legislative Council. After that, a date will be fixed (for joining BJP) and I will be contesting the upcoming polls from BJP. Shah expressed happiness about my decision to join the party and said with people like me joining, it will benefit the party,” Horatti said after meeting Shah.

Speaking to reporters, the senior politician said there are some technical issues for him to resign immediately as the Deputy Chairman post remains vacant, and after clearing them, he will resign as Chairman and join the BJP soon.

With this, Horatti, who was elected as MLC seven successive times from 1980, has ended his long association with the JD(S).

Asked about the reason for him to join the BJP by quitting JD(S), Horatti said, ”It is nothing but politics…I still have the same affection and good opinion towards the JD(S), but as the voters’ preferences and system changes, we too have to take certain decisions suddenly and I have taken it. I had been in JD(S) for a long period…” To a question on ideological differences in both parties, he said, ”Please don’t ask about ideology in politics.” Considered to be among the senior-most MLCs, 76-year-old Horatti was seen as a prominent Lingayat face of the JD(S) from north Karnataka.

He had been education minister in the state, and was elected as the Chairman of the Legislative Council in February 2021.

The MLC polls from graduates’ and teachers’ constituencies are expected in June or July this year. PTI