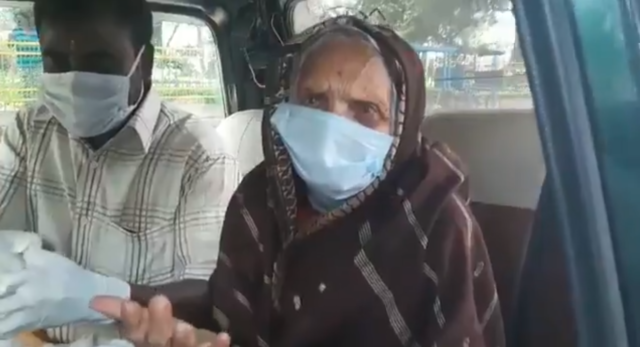 In a cause for cheer, a woman, said to be 110 years old, has recovered from Covid-19 and was discharged on Saturday in Chitradurga district of Karnataka.

According to health oicials, Siddamma, who stays in the police quarters, has five children, 17 grand children and 22 great grandchildren.

On July 27, she tested positive for coronavirus along with a few other family members and accordingly she was brought to the Covid designated hospital in Chitradurga where she completely recovered from the disease.

The frail woman walked out of the hospital with the support of four people to be greeted by a team of doctors and paramedical staff.

When she was asked whether she was scared after testing positive, Siddamma said, “I am not afraid of anyone.” She was happy with the treatment and food given to her in the hospital.

Later speaking to reporters, District Surgeon Basavaraju said it is a matter of great pride that the oldest woman had recovered from coronavirus and been discharged from the government hospital.

“So far as I know, it is a record in itself that a 110-year-old woman has recovered from coronavirus.She is the mother of a policeman who lives in the police quarters,” Basavaraju said.

He said a 96-year-old woman had also recovered from coronavirus in the hospital.

Warning to villagers after 75,000 cusecs released from KRS

Liquor stores, paan shops will be allowed to function in green zones