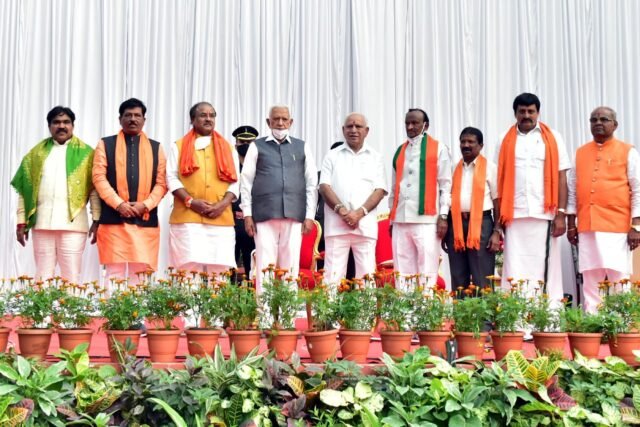 A week after expanding his cabinet, Karnataka Chief Minister B S Yediyurappa on Thursday allocated portfolios to the seven new inductees and also effected a reshuffle of the departments of some ministers.

Among the new Ministers, Umesh Katti gets the Food, Civil Supplies and Consumer Affairs while S Angara has been given Fisheries, Ports and Inland Transport.

Murugesh Nirani will be the Mines and Geology minister and Arvind Limbavali gets Forest Department, according to an official gazette notification issued in this regard with the consent of the Governor.

Among the others, R Shankar gets Municipal Administration and Sericulture portfolio while MTB Nagaraj would be the Excise Minister and C P Yogeshwar in charge of Minor Irrigation department.

Madhuswamy was the key minister who used to put up a strong defence of the government in the Assembly. The Law, Parliamentary Affairs and Legislation department has been given to Home Minister Basavaraj Bommai as an additional portfolio.

C C Patil, who earlier held the Mines and Geology portfolio has now been given charge of Small Scale Industries and Information and Public Relations department also.

Minister Kota Srinivas Poojari has been relieved from the responsibility of Fisheries, Ports and Inland Transport Department and will now have Muzrai and Backward Classes Welfare Department.

While Haj and Wakf Department has been taken back from Animal Husbandry Minister Prabhu Chauhan; Labour Minister A Shivaram Hebbar has been divested of the Sugar department.

According to sources, there is resentment among some Ministers about portfolios allocated to them and are likely to meet the Chief Minister in this regard.

Ending a long wait, Yediyurappa had expanded his 17-month old cabinet on January 13, by inducting seven ministers as he also dropped H Nagesh who was holding the Excise portfolio.

Also, several MLAs had expressed serious reservations about MLCs not elected by the people being made Ministers, lack of representation with most Ministers still from Bengaluru and Belagavi districts, and also on their ”seniority or sacrifice” not being considered.

There are now 33 Ministers in the cabinet, whose total strength is 34. PTI

Miscreants target a small Christian place of worship in Chikkaballapura