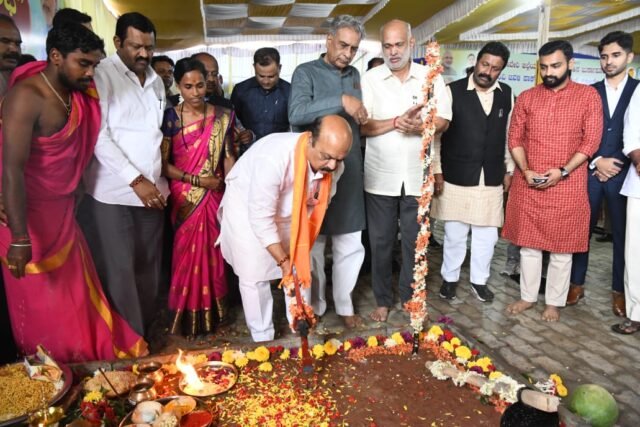 Karnataka Chief Minister Basavaraj Bommai on Saturday announced that textile parks will be set up in every Taluk headquarters of north Karnataka.

After laying the foundation stone for a textiles park and readymade garments unit in his constituency Shiggaon, he said, “I want to see textile parks in every Taluk of North Karnataka. I started it from my Taluk (Shiggaon in Haveri district) with a hope that I can resolve the challenges. In future we will set up such textile parks in every Taluk.”

Shiggaon in Haveri district is the home town of Bommai.

According to him, textile industry provides jobs to large number of people. In Bengaluru alone over 10 lakh people work in textile units and almost 90 per cent employees are women.

“Earlier, women who were dependent on their spouse for to meet their expenses are running the family after getting employment.”

The Chief Minister said his government is bringing a policy to lay emphasis on garment industries in every Taluk which offers maximum jobs to women.

He also pointed out that there is immense scope for export in the textile industry.

“The entire world is eyeing India. We should make use of the opportunity. We should not allow these industries to centralise only in the metropolitan cities like Delhi, Mumbai, Bengaluru and Kolkata but in small towns as well,” Bommai said.

According to an official statement, the proposed textiles park will come up in an area of 59.34 acres and for the first time it would be set up on ‘Anchor-Promoter’ model.

Infrastructure facilities would be created in three phases for the textiles units and readymade garment factories, it said. The state government has provided Rs 25 crore for the first phase.

Anchor-promoter Texport Private Limited is investing Rs 42 crore to establish the readymade garments unit. It is expected to provide employment opportunities for about 5,000 people, the statement read.

Bommai was optimistic that more than 10,000 people will get job in and around Shiggaon due to the textile park in the near future. PTI

73 People Die Due To Flood, Rain-Related Incidents In Karnataka