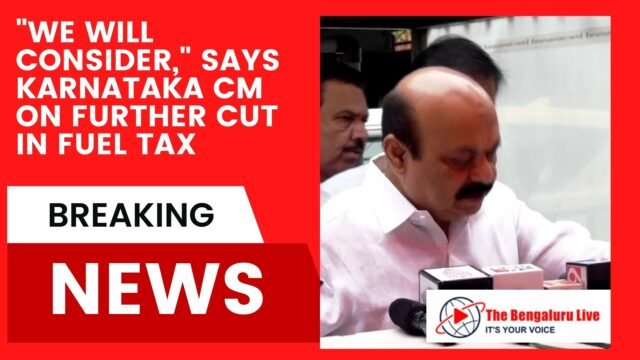 Karnataka Chief Minister Basavaraj Bommai on Sunday said his government will consider a further cut in fuel tax, following the Centre’s decision to reduce excise duty on petrol and diesel.

Speaking ahead of his visit to the Swiss ski resort town of Davos, to take part in the World Economic Forum’s Annual Meeting, he expressed confidence about attracting more investments into the state.

”The decision (Centre’s) has come on Saturday night, let’s see, we will consider it,” Bommai told reporters here in response to a query on any decision from the state government to further reduce petrol and diesel rates, following the Centre’s decision.

Bowing to public pressure, Finance Minister Nirmala Sitharaman on Saturday announced an Rs 8 per liter cut in excise duty on petrol and Rs 6 a liter on diesel to avoid an increase in fuel prices that were necessitated due to the surge in international oil prices.

Also, the government will give Rs 200 per cylinder subsidy to Ujjwala Yojana beneficiaries for 12 cylinders in a year to help ease some of the burden arising from cooking gas rates rising to record levels.

Thanking PM Modi and Sitharaman, the CM in a tweet late Saturday night said, ”Price of petrol to reduce by Rs 9.5/litre & diesel by Rs 7/litre…..This measure will be a huge boon to our womenfolk. Our government is ‘ of the people’ & ‘for the people. This is a pro-people decision.” Bommai, last month was non-committal on any further cut in fuel tax by the state government and had maintained that any decision in this regard will be taken after looking at the economy of the state.

The subsidy will be given upto 12 cylinders to over 9 crore beneficiaries of Pradhan Mantri Ujjwala Yojana. This measure will be a huge boon to our women folk. Our government is ‘ of the people’ & ‘for the people’.#PetrolDieselPrice
2/2

”We will be leaving today and from tomorrow sessions will start there (WEF). Tomorrow there is one session and another one on May 24, we will be attending that. We will be meeting several world leaders and industrialists there,” he said.

Noting that in the quarter ended recently, the highest Foreign Direct Investment has flown into India, which is good news, he said, ”Karnataka stands number one in that, like the last four quarters during this quarter too Karnataka has received highest FDI, so we are encouraged, several foreign and Indian industries are keen on investing in Karnataka. We are confident of getting a good response during the Global Investors Meet scheduled for November.” The government will be taking all the measures to see to it that it not only signs MoUs but Industries get established in the state.

”All set to participate in World Economic Forum Summit at Davos. Will be interacting with business heads of 18 countries about important economic & environmental issues. Davos will give great impetus to upcoming #InvestKarnataka2022 Global Investors’ Meet,” he later said in a tweet.

This will be Bommai’s first overseas trip as the Chief Minister. There was earlier speculation on whether or not he will go.

Bommai’s predecessor B S Yediyurappa had attended the Davos summit in January 2020, following which the BJP government in the state had introduced major reforms, including a policy change, by making it easier for investors to purchase land from farmers. PTI