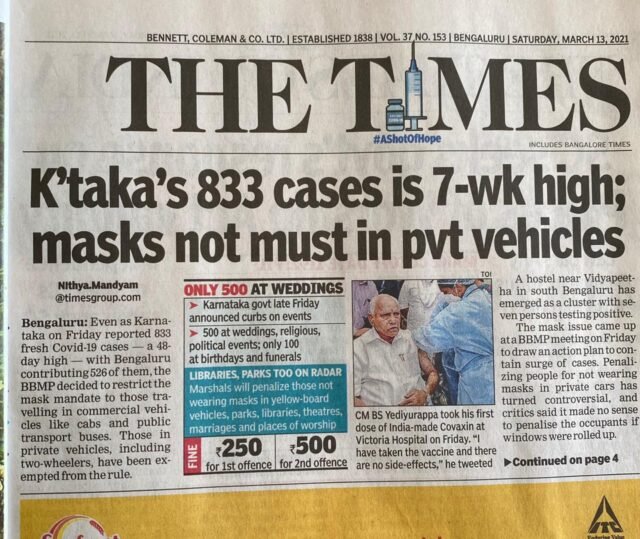 After the ‘premier’ publication’s second misleading report in seven months on the issue of wearing masks, BBMP Commissioner wants front-page clarification and also wants Editor to advise reporters not to repeat such mistakes

The self-proclaimed No. 1 English news daily in the country — The Times of India – has put foot-in-mouth again with a misleading front-page story that ‘masks (are) not must in private vehicles’ in Saturday’s (March 13) Bengaluru edition.

Following the report, BBMP Commissioner N Manjunatha Prasad shot off a letter to the publication taking strong objection to the false facts presented to its readers which would have the effect of misleading people on wearing masks in private vehicles. (As the rule stands, if a private vehicle has more than one occupant, wearing masks is mandatory.)

In his one-page letter to the ToI Editor, Prasad referred to the misleading news item whose first para reads: “Even as Karnataka on Friday reported 833 fresh Covid-19 cases — a 48-day high — with Bengaluru contributing 526 of them, the BBMP decided to restrict the mask mandate to those travelling in commercial vehicles like cabs and public transport buses. Those in private vehicles, including two-wheelers, have been exempted from the rule.”

The BBMP chief’s rejoinder said the news item was misleading citizens of Bengaluru as he had not given any direction (as implied in the ToI item) in the meeting held on Friday to discuss the rising Covid-19 cases. Prasad added, “I would like to clarify that neither the Government of Karnataka nor BBMP has issued any such instructions or order exempting persons travelling in private vehicles, including 2-wheelers, from wearing masks.”

Prasad shared the Zoom recording link of the meeting with the ToI Editor. The press release pertaining to Friday’s meeting has also been shared by Prasad in a BBMP media group.

The press release states, “I am hereby enclosing the link to the entire video recording of the meeting held yesterday for reference (https://zoom.us/rec/share/OHuxdRCKZBSimfGH6-5K4j5P-H5pqmrBb2_UF2jlVm_z8XIRmvg2QBw4eQGyaneg.mbTFEhz8ufcnJ-jS). As can be seen in the video recording, during the said meeting I never stated that private vehicles, including 2-wheelers, have been exempted from wearing masks; instead, I had instructed the BBMP marshals to concentrate more on crowded places like markets, marriage halls, malls, religious gatherings and vehicles with yellow boards.

“At a time when Covid-19 cases in Bangalore are rising, such news items only add to the deterioration of an already surcharged atmosphere.

This is not the first instance of the ToI’s foot-in-mouth predeliction. On August 26, 2020, its Bengaluru edition had reported that if a person is travelling solo, wearing a mask is not mandatory. At that time too, Prasad had clarified that citizens should not listen to rumours that masks need not be worn while driving a car or a bike in the city. “No such decision has been taken. If you leave the house, you must wear a mask,” he had then said.