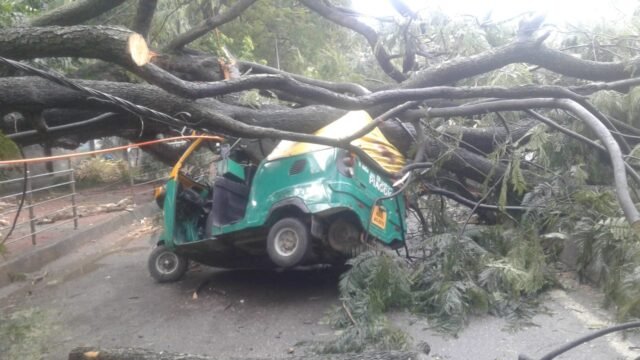 Sunday was a day of contrasts in the city. Temperatures of around 30 degrees C were followed by late-night showers, accompanied by thunder and lightning, which continued early into Monday morning. Several trees were uprooted in different parts of the city.

Roads were waterlogged but since it was late at night, motorists were largely unaffected. There were power disruptions in most parts of the city.

A huge tree on Cottonpet Tank Bund Road came down on a moving autorickshaw. The driver and passengers were pulled out by a police Hoysala, but the vehicle was wrecked.

A lightning strike reportedly cracked the overhead tank of a house in Nagarbhavi, but no one was injured.

As per the meteorological department, the rains in and around Bengaluru will continue for another 3 days.