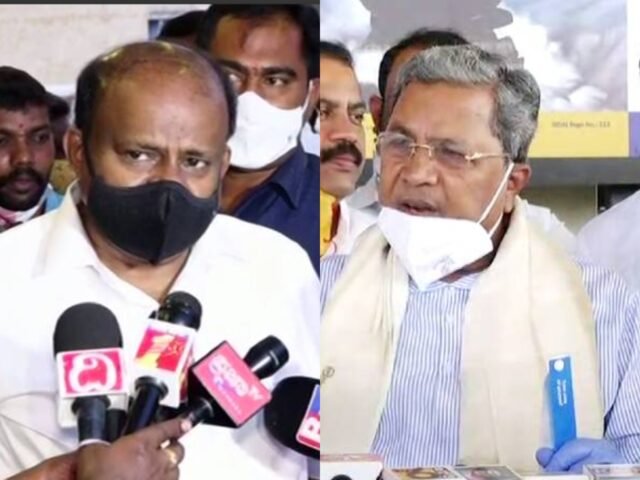 Former Karnataka chief minister and JDS leader H D Kumaraswamy on Saturday came down heavily against Congress and alleged that Opposition leader Siddaramaiah was responsible for the fall of his coalition government.

He said that his political career was ruined after joining hands with the Congress.

Speaking to mediapersons here on Saturday, he said “I Strongly feel that JD-S should have continued its alliance with the BJP in the State. The popularity that I had earned over a period of time went for a toss after JDS took the hasty decision of joining hands with Congress. Going by H D Deve Gowda‘s emotion, I agreed for the alliance. But Siddaramiah’s group played dirty politics only to end the alliance,” he alleged.

He said people used to make fun of me whenever I used to shed tears. It was all because of the Congress MLAs I sanctioned around Rs 19,000 crore for their constituencies. But they never cooperated with me. Siddaramaiah and his team plotted against me hoping he could become Chief Minister again. I was made a victim. It took me little time to release it was a mistake to get into an alliance with the Congress and it was late, now, I know the mistake and will try to rectify it, he pointed out.

JD-S leader said preparations are going on for the gram panchayat election, I will be talking to our party workers to up their confidence level. Our party workers will be allowed to contest the elections and I have issued orders accordingly, he said.

Referring to BJP Ministers visiting villages, he said I am happy they are thinking of villages at least now. Only during the election they want to visit villages. Even Yediyurappa went to Belagavi only to attend the party’s core committee meeting. Belagavi district was ravaged by floods. But he did not bother to talk to the farmers. Elections are more important for him than the farmer’s problems. Power is not permanent and he wants my BJP friends to know it.

Training his guns on the Centre, he said the Modi government seems to have forgotten the fact that it has a BJP Chief Minister in Karnataka. Some of the Centre’s decisions are harming Karnataka.

Digging at Siddaramiah, the JDS leader said, he thinks no one took cognisance of his meeting with other leaders. He tries to lay hide and seek politics but it is not the case with me, he added.

He also said that the bandh will have no impact on the government , but they have to bring out programmes and policies of all community persons. (agency)

60 lakh children in state to get polio vaccine