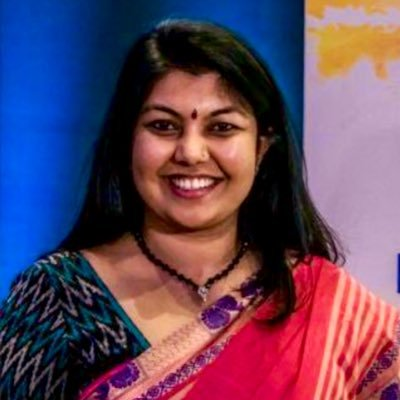 Jayanagar MLA Sowmya Reddy had to resort to some quick damage control after thebengalurulive published a story on Thursday titled ‘Kuvempu’s ‘Shiva’ becomes ‘Yesu’ in poster… and MLA has no answer!’ Before the trolling by angry netizens could intensify, the handle @INCBommanahalli put out her response wherein she claimed that her name was unnecessarily dragged into the ‘deity switching’ controversy.

That apart, in her Facebook post of November 24, the Congress MLA claimed that the  ‘mistake’ was brought to the notice of the event organisers.

Her post reads: “It has been brought to my attention that my name is unnecessarily being dragged into the controversy surrounding the change made to Rashtrakavi Kuvempu’s song in the invitation to the Kannada Rajyotsava celebration programme organized by ‘Om Kannada Mariyamma Karunada Sangha’ in Jayanagar.

It has been brought to my attention that my name is unnecessarily being dragged into the controversy surrounding the change made to Rashtrakavi Kuvempu’s song in the invitation to the Kannada Rajyotsava celebration program by ‘Om Kannada Mariyamma Karunada Sangha’ in Jayanagar.

“As someone who has the deepest respect for Rashtrakavi Kuvempu and his work, I wrote about this mistake to the president of the above organization on 18-11-20 as soon as I received this invitation, and I was told that the invitation letter would be corrected and the event would be postponed to 23-11-20 instead of the original date of 22-11-20. As MLA, I have participated in all programmes organized by Kannada organizations in the Jayanagar constituency to encourage and promote them.

“Last month, during the Ayudha puja celebrations held in the MLA’s office, our staff used a portrait that was in the office with a copy of the Constitution. Even then, some people attempted to make a controversy for their own political gain.

“Certain people who are intolerant of the development work that is taking place in the constituency have been making repeated attempts in vain to create confusion among the public.”

Then, like a true politico, Reddy changes tack and writes: “How many of the 25 BJP MPs elected by the state have protested against the Central government consistently discriminating against Kannadigas on issues like GST, flood relief, IBPS examination, Hindi imposition and the Mahadayi issue?

“The BJP government has cut 61% of the Rs 316 crore worth of funds that were granted for the development of Jayanagar constituency during the coalition government. BJP MPs, MLAs, former corporators and leaders who did not dare question or protest against the government when it came to such important problems are now protesting against such a trivial issue.

“The government, which has funded newly established development corporations, is seemingly unable to release funds for the pensions of senior citizens, widows and the differently-abled.

“Those who truly care about Kannada should protest for such essential causes that are actually affecting the public.

“Everyone has already noticed on my social media accounts that I always prioritize Kannada and mandatorily keep track of each and every programme or project in Kannada.

“The love and commitment I have for Kannada and Karnataka is unquestionable. I am and always will be ever-ready to work for the preservation of Kannada and our rich culture and heritage.”

The heavily trolled MLA ends with: “I request the public to pay no heed to rumours and misinformation like this.”

Colleges to resume offline classes for remaining grades on Jan 15