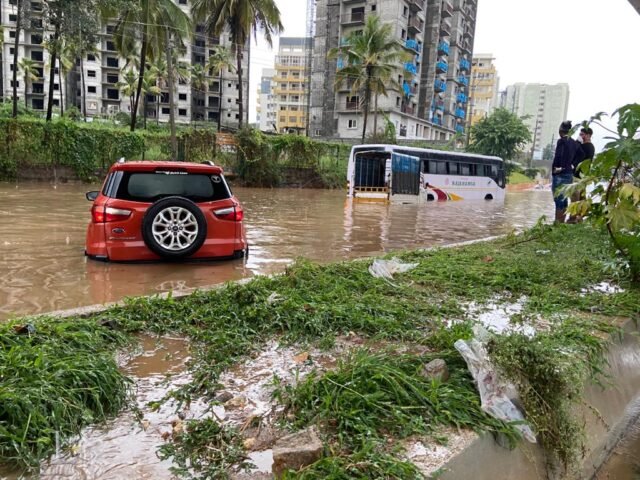 Thursday evening’s rains brought cheer to Bengalureans in general, but a caved-in road and a storm water drain’s retaining wall collapsing near Kengeri created panic amongst motorists after the Vrishabhavathi river overflowed onto the main road.

The scary sight was captured on mobile cameras and shared widely. (See the video)

Sources told thebengalurulive.com that substandard work by the contractor was responsible for the retaining wall collapsing.

An officer who visited the spot said that the RCC wall was constructed over the old SSM wall by the National Highway authorities for nearly 130 metres and a 1-metre width.

Top BBMP officials, including Commissioner BH Anil Kumar and Mayor M Gautam Kumar, failed to visit the spot to get first-hand information on the incident.

Police Commissioner Bhaskar Rao visited the spot and instructed his staff to cordon off the side of road that had caved in, and told the civic agency to arrange for sandbags to avoid further damage to the road.

Sources said the Mayor and Commissioner, along with civic engineers, are expected to visit the spot on Friday morning. TraffIc heading towards Mysuru has been diverted to the other side of the road.