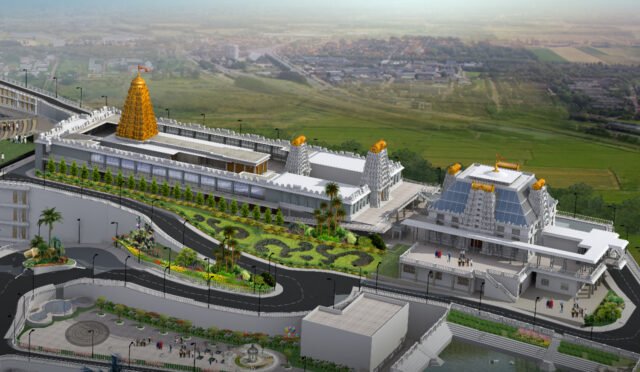 The President of India Mr Ram Nath Kovind will dedicate to the nation Rajadhiraja Sri Govinda Temple of ISKCON on June 14 at Vaikunta Hill, Off Kanakapura Road at Vasanthapura in Bangalore.

The Governor of Karnataka MrThaawar Chand Gehlot, the Chief Minister of Karnataka Mr Basavaraj Bommai, the Member of Parliament from Bengaluru Rural Mr D.K Suresh, the Legislator from Benglauru South Mr M Krishnappa are among the galaxy of dignitaries, who will be participating in this special event.

This traditional, stone-carved structure is a replica of the famous Sri Venkateshwara Temple in Tirumala. The dimensions, stone carvings and aesthetics are also similar. The deity of Lord Srinivasa is nearly the same height and has been named Rajadhiraja Sri Govinda, which means, the Lord is the King of kings.

The temple will have facilities for the spiritual and cultural education of children, youth and families. A large queuing hall will be available where devotees can wait comfortably to have the darshan of Rajadhiraja Sri Govinda and other deities. A free Annadaan Hall (Mass feeding facility) will benefit all the pilgrims. This complex has been constructed with the generous contributions of donors and patrons.

The temple authorities will be performing elaborate ceremonies and sacred rituals according to Vedic traditions in the coming weeks. The campus will be fully open to the public from August 1, 2022 , according to the information available from the temple.

The temple’s architecture is based on the traditional stone design and is a replica of the famous Tirumala Tirupati temple. The Dhvaja Stambha is made of a 50-feet single log of teakwood and the magnificent Gopura will rise to 76-feet in a 7-tier Vimana design. As described in Vedic literatures, there are seven doors to the temple’s sanctum resembling that of Vaikuntha Loka. A 9-feet tall deity of Sri Rajadiraja Govinda, resembling the deity of Tirupati, will give His darshan and bless lakhs of devotees in the years to come.

The Rajadiraja Govinda temple will be surrounded by the shrines of Sri Sudarshana Narasimha, Smt Mahalakshmi, Sri Lakshmi Narasimha, Bhakta Hanuman and Garuda deva. The deity of His Divine Grace A.C. Bhaktivedanta Swami Prabhupada, Founder-Acharya of ISKCON, will be installed in a separate temple.

Don’t project me as CM face, Siddaramaiah to MLAs as fissures in Karnataka Cong...