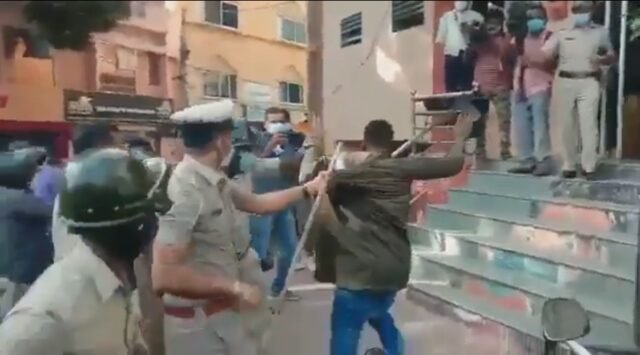 Police on Monday said they had to lathicharge some African nationals staging a demonstration here following the alleged custodial death of one of their fellow countryman.

According to the police, the African was detained for possessing five gms of Ecstasy pills and while in custody he complained of chest pain and cold.

The police said they took the foreigner, who was studying in college, to a hospital where he died of a suspected cardiac arrest.

They said it was not a case of custodial death.

After hearing this, a number of Africans staged the protest in front of the police station where their countryman was detained.

Some students tried to attack police and @BlrCityPolice attacked them with lotty and boots also with walkies. It wasn’t expected there. pic.twitter.com/cvSknuP4Fp

At JCnagar #Bengaluru. It was so brutal to attack anybody protesting @BlrCityPolice . there was a way to protest but @_AfricanUnion students crossed the limits, Police crossed limits while lotty charging and Detaining them. It was inhumane. @DCPNorthBCP pic.twitter.com/873aUJeaQj

One of the protestors allegedly assaulted a policeman for the incident. This led to the lathicharge, said the police.

Police have said they launched a crackdown on African nationals across the city and raided 65 houses on July 15 before arresting 38 foreigners for overstaying.

Police said they had seized a huge quantity of narcotics from the foreigners. PTI

The @jcnagarps team arrested a Congo national Joel Shindani Malu last night for possession of drugs. While in custody, he experienced chest pain and later died in a private hospital, while under treatment. (1/3)

Investigation into the death is being conducted as per NHRC guidelines including inquest by a judicial magistrate. The investigation has been transferred to CID by the DGP. (3/3)

Cops seek info on ‘drugs’, netizens give ’em a ‘drubbing’