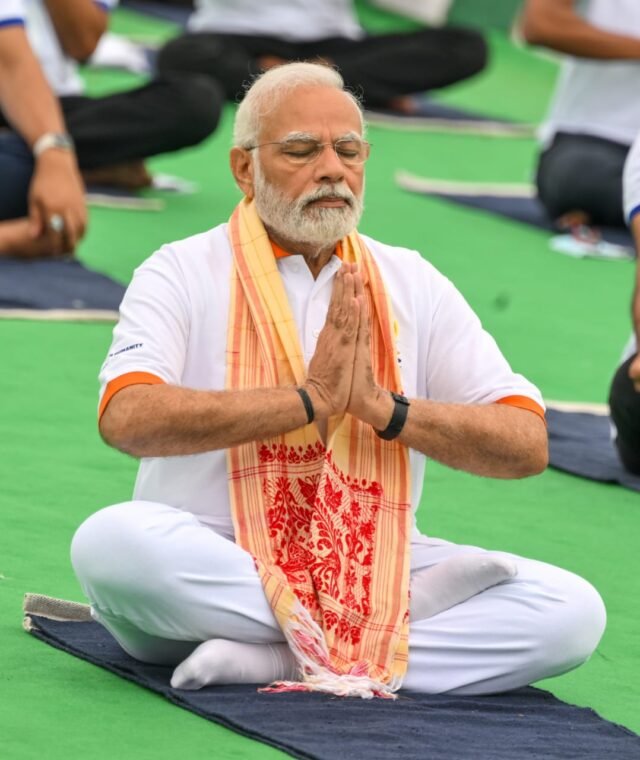 Prime Minister Narendra Modi on Tuesday performed yoga at the main event of the eighth edition of the International Day of Yoga in the heritage city of Mysuru in Karnataka. More than 15,000 people participated in the Yoga celebrations along with the Prime Minister at the Mysore Palace grounds.

Karnataka Governor Thaawarchand Gehlot, Karnataka Chief Minister Basavaraj Bommai, Union Minister for Ayush Sarbananda Sonowal, and officials of the Ministry of Ayush and the Government of Karnataka and other dignitaries performed yoga at the event. This year the theme for the celebration is “Yoga for humanity”. The theme has been selected after much deliberation/consultation and it appropriately portrays, how during the peak of the COVID-19 pandemic, yoga served the humanity in alleviating the sufferings and in the emerging post-COVID geo-political scenario too, it will bring people together through compassion, kindness, foster a sense of unity and build resilience among people world over.

Prime Minister’s Yoga programme at Mysuru is also part of the novel programme ‘Guardian Yoga Ring’ which is a collaborative exercise between 79 countries and United Nations organisations along with Indian Missions abroad to illustrate Yoga’s unifying power that surpasses National boundaries. As the sun apparently moves from the east to the west across the world, the Mass Yoga Demonstrations in the participating countries, if seen from any one point on Earth, will seem to be happening one after the other, almost in tandem, thus underlining the concept of ‘One Sun, One earth’.

The Digital yoga exhibition will showcase the latest technologies like Virtual Reality (VR) to project the history and wisdom of Yoga. The static exhibition consists of 146 stalls which have been taken up by yoga institutions, Ayush institutions under the ambit of the Government of Karnataka and the Government of India. Keeping the overarching theme of the 75 years of India’s independence the Ministry for Ayush also identified 75 locations for Union Ministers to participate in the Yoga Day celebration.

This year International Day of Yoga 2022 will see many firsts, the ‘Guardian ring’, yoga demonstration by Union cabinet ministers at 75 iconic locations in India and a special digital yoga and static exhibition in Mysuru Dussera Grounds, Mysuru. The Digital yoga exhibition will showcase the latest technologies like Virtual Reality (VR) to project the history and wisdom of Yoga. The static exhibition consists of 146 stalls which have been taken up by yoga institutions, Ayush institutions under the ambit of the Government of Karnataka and the Government of India.

According to the Ministry of Ayush, it is expected that as many as 25 crores of people will participate in International Day of Yoga 2022 celebrations across the world. Earlier, Yog Guru Ramdev performed yoga at Patanjali Yogpeeth in Haridwar. Many children and other people also attend the event.

It was during his speech at the UN General Assembly in September 27, 2014, Prime Minister Narendra Modi first floated the idea of the International Yoga Day. The draft resolution passed by India was supported by 177 nations. With universal recognition and growing popularity of Yoga, the United Nations declared June 21 as the International Day of Yoga on December 11, 2014. The first International Yoga Day was celebrated on June 21, 2015. (ANI)

Baby born on board Bengaluru-Jaipur flight

PHCs will be upgraded: Health Minister