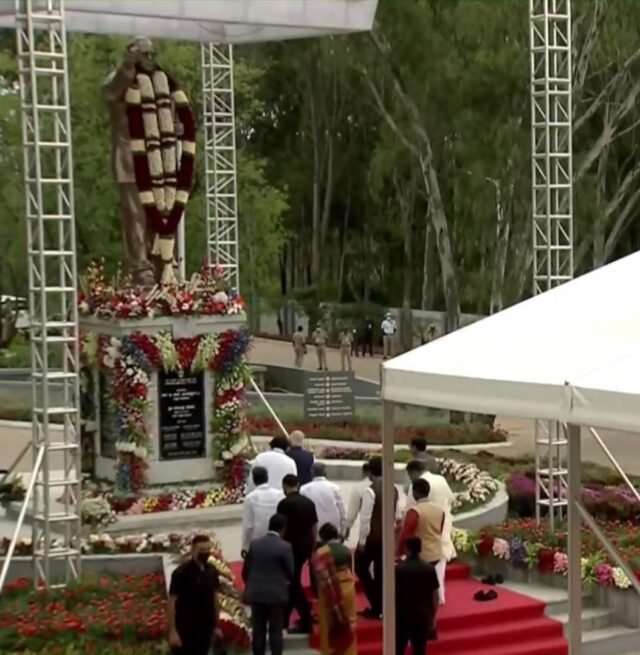 Prime Minister Narendra Modi on Monday inaugurated the new campus of Dr B R Ambedkar School of Economics (BASE) University here and also unveiled a statue of the architect of Indian Constitution installed at the campus.

At the event, he also unveiled 150 ‘Technology Hubs’ that have been developed by transforming the Industrial Training Institutes (ITIs) across Karnataka.

The Prime Minister said Karnataka has a special contribution in India’s strides in the world of technology, research and innovation.

“In this context, the new Technology Hubs developed by transforming ITIs will provide skilling opportunities for the youth and create several employment opportunities,” Modi said.

Developed at a cost of over Rs 4,700 crore, the Technology Hubs initiative is supported by many industry partners, and aims to create a skilled workforce to address Industry 4.0 manpower needs.

Out of the total cost, the state government has contributed Rs 657 crore while Tata Technologies Limited (TTL) and its industry partners contributed Rs 4,080 crore. The state has also spent an additional Rs 220 crore to create dedicated workshops and technology labs at these 150 ITIs.

These Technology Hubs, through its various innovative courses, will provide high-skill training in cutting-edge technology and improve opportunities for ITI graduates in employment and entrepreneurship.

The residential BASE University was set up in 2017 in recognition of the exemplary contributions made by Ambedkar in the development of independent India and as a tribute to his memory on the occasion of his 125th birth anniversary.

Modi said BASE University is a tribute to the intellectual prowess of Dr Ambedkar.

“The new campus of this institution will benefit several students. The new tech hubs which have been inaugurated will also be a boon for our ‘Yuva Shakti’,” the Prime Minister added. PTI