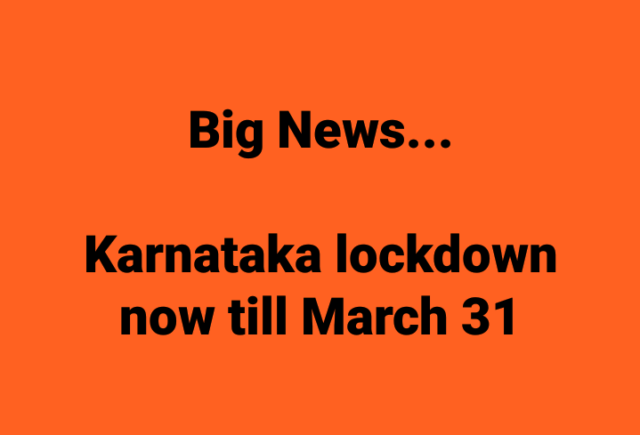 In a major move, the Karnataka government has decided to extend the statewide lockdown till March 31.

The decision was taken at an emergency cabinet meeting chaired by Chief Minister BS Yediyurappa on Wednesday afternoon, which lasted for more than 3 hours.

Later, the CM made the announcement on the floor of the state assembly.

The CM also announced that Rs 200 crore would be released with immediate effect to stop the spread of corona virus.

With this announcement, school and college holidays will also be extended till March 31. Further, directions have been issued to shut all pubs and clubs, apart from extending work-from-home directions for techies working in various IT firms in the Bengaluru

# 15-day quarantine for all intl flyers

# Stamp on hand on intl travellers

# The CM has given a free hand to the medical education department and the health department to tackle the spread of the corona virus. The government is well-prepared and for the past 2 months various steps have been taken. All international travellers have been placed in 3 categories and are being dealt with.

# The state government has released Rs 200 crore to tackle Covid-19.

# The government has decided to strictly quarantine all International passengers for 15 days. All government hospitals and private hospitals, budget hotels and resorts near the international airport are being converted into isolation centres.

# At all hotels, pubs, including pubs inside five-star hotels, marriages and jatras, not more than 100-150 people will be allowed.

# The government has decided to stamp the right hand of all international travellers coming to Bangalore with immediate effect.