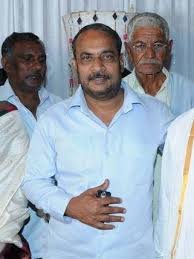 Karnataka Legislative Council Deputy Chairman S L Dharme Gowda was found dead on a rail track in Chikkamagaluru district of Karnataka in the early hours of Tuesday, with police sources claiming he died by suicide.

The body was found on a rail track near Gunasagara in Kadur taluk, they said.

Dharme Gowda, 64, who was an MLC from JD(S), is survived by his wife, son
and a daughter. His brother, S L Bhoje Gowda, is also an MLC.

According to sources, Gowda had left his farmhouse at Sakharayapattana in a private car on Tuesday evening but did not return home, following which his family members and staff started searching for him.

He had reportedly asked his driver to stay at a distance and went alone on the pretext of talking to someone, the sources said, adding that a suicide note has been recovered.

The body has been shifted to the McGann Hospital in Shivamogga, official
sources said.

Chief Minister B S Yediyurappa expressed shock over the incident, terming it “unfortunate”. He lauded the MLC for efficiently conducting the legislative council as its deputy chairman.

JD(S) patriarch and former prime minister H D Deve Gowda, in a tweet, expressed shock over Dharme Gowda’s death and remembered him as a gentleman politician.

His death is a loss to the state, Deve Gowda added.

JD(S) leader and former chief minister H D Kumaraswamy said Dharme Gowda was like a brother to him. “His death has caused a shock to me. He was an upright politician,” Kumaraswamy said in a tweet.

Dharme Gowda was at the centre of the high drama in the legislative council on December 15, which saw BJP-JD(S) and Congress members hurling abuses and pushing each other over a row pertaining to a no-confidence motion against Chairman K Pratapachandra Shetty.

During the ruckus, Dharme Gowda, who was on the Chairman’s seat, was pulled down by some Congress legislators who accused him of occupying the chair against the rules. PTI

IT/BT offices to stay shut till May 3