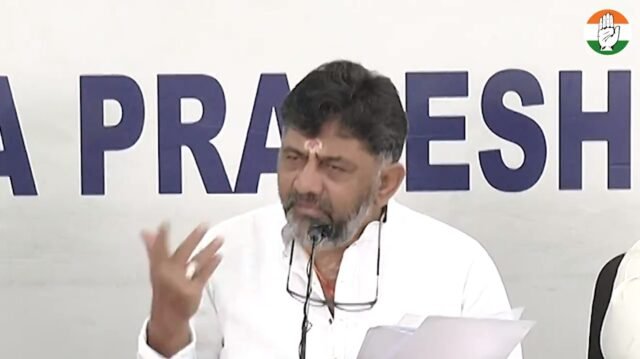 Accusing the Karnataka government of understating COVID-19 death figures, state Congress President D K Shivakumar on Thursday said his party will draw up a list of people who have died during the pandemic.

While the government’s coronavirus toll is over 35,000, the KPCC chief has claimed that more than three lakh people have died due to the disease.

‘Death audit has to be done compulsorily, Whether you (government) will do it or someone else.. Congress party will go to every house and draw up a list (of those dead) and give it to you (govt).

Those who died due to COVID this year and last year, we will make a list and are committed to getting them compensated,’ Shivakumar said.

Speaking to reporters here, he said Congress workers and leaders will visit every house, and in every gram panchayat and taluk panchayat level the party has appointed ‘Congress COVID warriors’ for this purpose.

‘We have made our own application form for households that have not received COVID death certificates.

Our workers will mount pressure on officials to issue certificates, which will be used to claim compensation from the government,’ he said referring to the massive month-long outreach programme launched by the party that began today.

Hitting out at the BJP government with regards to the Chamarajanagar tragedy that saw death of Covid-19 patients at the District Hospital in May, reportedly due to the scarcity of oxygen, Shivakumar said, till now not even a single Minister or officer has been held responsible.

‘The government has compensated only 24 families out of 36 deceased,’ he pointed out while demanding action against those responsible, and said the least the CM can do is visit their homes. PTI

Portuguese trio entered tiger reserve ‘unknowingly’, to be let off