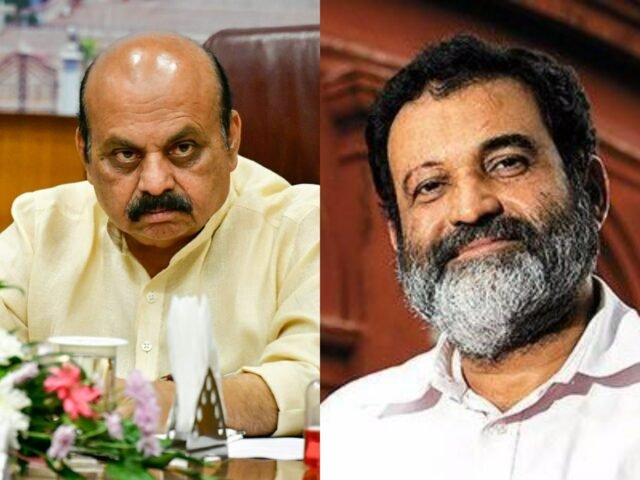 Three days after the outburst of Information Technology industry veteran TV Mohandas Pai seeking Prime Minister Narendra Modi’s intervention in addressing Bengaluru’s infrastructure concerns, Karnataka Chief Minister Basavaraj Bommai, in a veiled jibe at Pai, said “there seems to be a concerted effort from vested interests to tarnish the image of the city of Bengaluru.”

TheBengaluruLive has accessed the proceedings of the review meeting chaired by the CM with regard to various issues pertaining to Bengaluru. During the meeting, the CM is learnt to have expressed his anger over several RWAs, NASSCOM (the umbrella body of IT and BPO companies) and ORRCA (Outer Ring Road Companies Association) ‘tarnishing’ Bengaluru’s image with their vocal criticisms.

The Chief Minister also reportedly opined that the recent criticism with regard to the city seemed to be a concerted effort from vested interests to tarnish the image of Bengaluru. “This is not an acceptable situation and like-minded people from NASSCOM, ORRCA and RWAs need to be requested to vocally defend the city’s image,” he is learnt to have said, according to minutes of the meeting signed by Bommai. According to sources, the CM has directed BBMP Chief Commissioner Gaurav Gupta to have a one-to-one engagement with these agencies to bolster the city’s reputation.

Furthermore, the Chief Minister reportedly pointed out that issues critical to Bengaluru’s development require an organized approach from all agencies and parastatals working within the city.

The Chief Minister opined that the motivational level and delivery efficiency of the engineers in various organizations appears to be not up to the acceptable level and a serious assessment of the same needs to be done immediately. If the engineers do not get involved in projects, the output of these projects does not match public expectations. The BBMP Chief Commissioner was asked to immediately look into these issues as the major project implementation is through BBMP.

Bommai also directed the civic chief to provide details of work completed on arterial and sub-arterial roads since November 2021.

At this juncture, the ACS-UDD reportedly said that BMRCL has been asked to take up developmental work on Bannerghatta Road, ORR and Mysore Road by April 13.

The Chief Minister instructed KRDCL to cancel the present HDC tender and invite 7-day short-term tenders in packages for the development work. Financial bids are to be opened within the shortest turnaround time after the technical bid opening/evaluation, he said. The CM instructed that the practice of issuing commencement certificates for buildings should be done away with and the related order should be issued immediately.

The Chief Minister instructed that approval of Amrutha Nagarothana action plans of works under the Rs 3,661 crore grant should be immediately finalized by BBMP and submitted to the government, followed by immediate approval of the government.

With regards to monsoon preparedness, the BBMP Chief Commissioner said that work on vulnerable points has started. At this juncture, the ACS-UDD said that in line with the budget announcement, a government order to prepare and submit the Rs 1,500-crore action plan for SWDs has been issued. The Chief Minister replied that out of the Rs 1,500 crore, an action plan of works pertaining to vulnerable points (Rs 472 crore) needs to be immediately submitted to the government, followed by immediate approval of the government.

The Chief Minister also asked for a note on the present status of signal-free corridors.

Hebbal flyover to be widened

Most importantly, Mohandas Pai in his television channel interview had criticized the traffic mess at the Hebbal flyover which gets choked during peak hours, leaving travellers coming from the airport to the city stuck for hours in traffic.

Considering this, the Chief Minister has directed the widening of the Hebbal flyover. “Hebbal flyover to be widened. ACS-UDD and MD-BMRCL to review the situation and suggest the way forward, and Chief Secretary to finalise the same,” the directions read.

The Chief Minister asked Chief Commissioner, BBMP to issue an order that from now onwards the agency which cuts the roads will be responsible for restoring the road to a ‘standard’ condition within the stipulated timeline.

A team under the chairmanship of the ACS-UDD is to keep track of and update on the actual progress of works vis-à-vis planned work in the ongoing week. The team will also provide advance information on the next week’s programme. The Chief Commissioner, BBMP, the BMRCL MD, the Bescom MD, Chief Engineers and other officers as required will be part of the team, as per the CM’s directions.

Karnataka’s first ever rollout of Electric Buses for public transportation