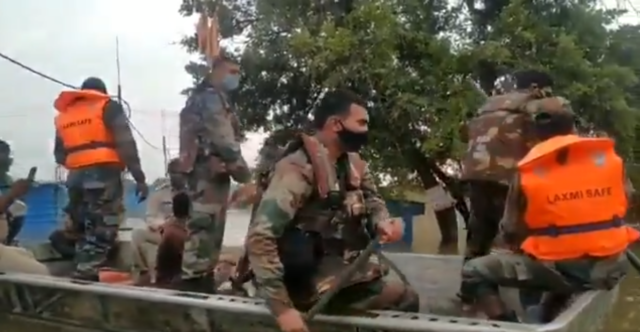 Amid fresh rain and overflowing river Bhima with extra discharge of more than 8.54 lakh cusecs of water from Sonna barriage in Afzalpur taluk of this district, the Indian Army and National Disaster Response Force (NDRF) on Sunday joined rescue and relief works in Kalaburagi and Vijayapura districts.

The Three company of Army, each comprising 100 personnel and led by Major Martin Aravind, arrived from Secunderabad on Saturday evening and was received by Kalaburagi Additional Deputy Commissioner Shankar Vanikyal at the district border. The company was immediately split into two teams and sent to flood-affected villages of Afzalpur and Jewargi taluks.

After a four-day gap fresh rains began on Sunday afternoon. The rains began at about 1425 hrs and its spread and effect are yet to be known.

The water level in Bhima has risen as the inflow and outflow at Sonna Barrage rose from 8 lakh cusecs on Saturday to 8.5 lakh cusecs on Sunday. Deputy Commissioner Vijaya Jyothsna, Chief Executive Officer of Zilla Panchayat Dr. P. Raja, Additional Commissioner of Public Instruction Nalin Atul visited the Sonna Barrage and other flood-hit areas and took stock of the situation.

Meanwhile ,A company of Indian Army arrived from Secunderabad to join hands in rescue and relief operations. The 98-personnel contingent is divided into three teams and deployed in flood-hit Afzalpur, Jewargi and Shahabad taluks for rescue operations.
When an army team rushed to Udachana village in Afzalpur taluk on Sunday afternoon the residents refused to get evicted from their places as a protest against the government. They complained that the government had not made any alternative arrangements even after their village was flooded and the houses were destroyed repeatedly.

However , the official sources said that more than 2,000 people were rescued and rescue operations continued in Many villages on Sunday noon also.

Over 8.50 lakh cusecs of water has been released into the Bhima river from the Ujani and Veer dams in Maharashtra on Saturday, resulting in flooding. Bhima river water has entered the holy shrine of Deval Ganagapur in Afzalpur taluk, where the Dattatreya temple is situated and attracts a large number of devotees from Maharashtra, Telangana and Karnataka.

Taking note of the gravity of the situation, Chief Minister B.S. Yediyurappa, in a media release, said that he would undertake an aerial survey in flood-hit areas of Kalaburagi, Yadgir and Vijayapura district on Wednesday.

Meanwhile, the fresh rain continued in the district and overcast weather prevailed in the region. (Agency)

7-day lockdown in Bengaluru City and Rural from July 14