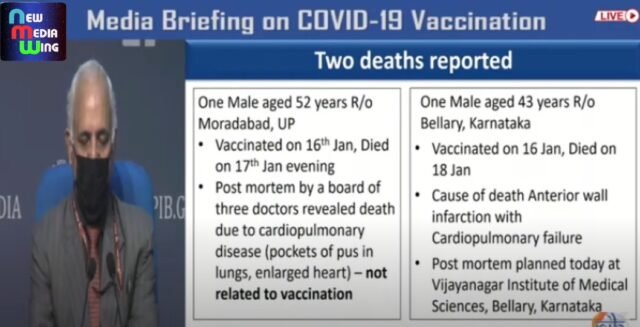 A 43-year-old health department employee in Karnataka died of a massive heart attack on Monday, two days after he was administered COVID-19 vaccine, the government said.

The deceased, Nagaraju of Ballari district, was a permanent employee of Health department. He was vaccinated on January 16 at around 1 PM and he was normal till this morning, the department said.

When contacted, Dr C N Manjunath, Director, Sri Jayadeva Institute of Cardiovascular Sciences and Research, an autonomous government institute, said, “The death is only a coincidence and not related to the vaccine.” Dr Manjunath is also a member of the technical advisory committee, Karnataka government, on COVID-19.

Today morning when he came to duty, he complained of chest pain at around 09:30 am and collapsed. He was treated immediately and reffered to Jindal Sanjeeveni hospital for higher treatment. He was admitted in Jindal Sanjeeveni Hospital at 11:15 am.

“Today morning when he came to work, he complained of chest pain at around 9.30 am and collapsed. He was treated immediately and referred to Jindal Sanjeevani hospital… highest level of treatment was provided, but he couldn’t be saved,” the department said in a statement.

The conclusion is that the death was due to cardio respiratory arrest secondary to acute antereo septal wall MI.

None of the other health care workers who received the vaccine from the same vial had any adverse events, it said. The district level AEFI (Adverse Events Following Immunisation) Committee held detailed discussions and concluded that Nagaraju’s death was due to “cardio respiratory arrest secondary to acute antereo septal wall Myocardial Infarction (heart attack).” PTI

Our goal is to bring new mothers’ mortality rate to zero: Sudhakar