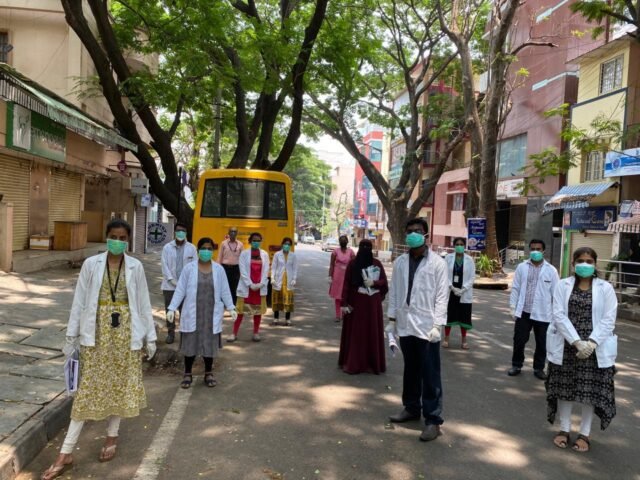 Hampi Nagar in south Bengaluru has become the new containment zone after a total of four Covid-19 positive cases were reported in two days.

The BBMP with the help of cops has sealed a 100-metre area surrounding the residence of P465 in Hampi Nagar.

On Saturday, three members of a family were reportedly found  Covid-19 positive. The head of the family, a 45-year-old female, was first confirmed positive  on Friday.

Shockingly, these 4 contacts have more than 15 primary  contacts who are spread across neighbouring Vijayanagar and Nagarbhavi. BBMP health officials  have reportedly traced them and quarantined all of them.

As per the health officials, the head of the family, patient 465, developed symptoms and got admitted to the Rajiv Gandhi Institute of Chest Diseases on Friday, where she was confirmed positive.

Later the administration collected the samples of her three relatives, who were also declared positive on Saturday.

According to sources, the woman had lost her husband on April 4 and a few of their relatives and neighbours had participated in the final rituals. A family function was also held on April 14, in which their close relatives from Vijayanagar and Nagarbhavi had participated.

Sources said the woman developed fever on April 19 and went to the fever clinic ran by  BBMP. As a normal procedure, the BBMP officials gave her paracetamol and other pain-killers, and she returned home.

The next day, she developed some gynaecological problems. She was taken to BBMP’s hospital in Mudalpalya. Again, after being given a painkiller, she was sent back home. But when she became breathless the next day, she was again rushed  to the Mudalpalya hospital. She was referred  to the Rajiv Gandhi Institute of Chest Diseases where she was confirmed with Covid-19.

Sources said the doctors at the Rajiv Gandhi Institute conducted a Covid-19 test after they found that the woman had pneumonia. Now, she is being treated for SARI.

The other patients who were her primary contacts have been named  P498, P499 and P500 as reported on Saturday.

“The state government should take another call on relaxing the lockdown. The number of cases are increasing after lockdown was relaxed, as more people have come on to the streets, ” said an officer.

Ahead of lockdown, booze worth Rs 230 crore sold