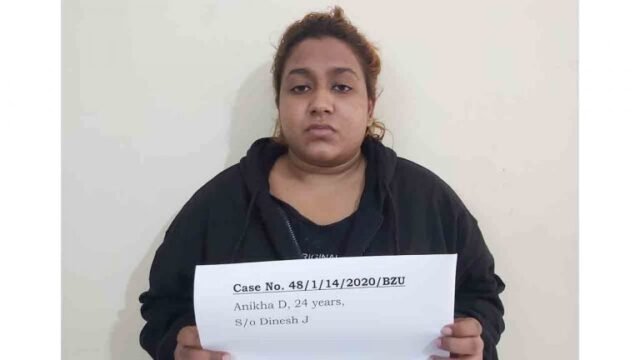 Her associates would forward drugs hidden in soft toys to clients

With the NCB and the CCB both turning the heat on the drug mafia’s operations in Bengaluru, more facts are tumbling out about the drugs kingpin, Anika D, who was recently arrested by the NCB along with 3 associates.

As it transpires, the 24-year-old has three aliases — Anika D, Ani and B Money.

Originally from Tamil Nadu, she is a resident of Yercaud in Salem, and was pursuing a course in hotel management in Shevaroys College in Yercaud, which she subsequently discontinued. She has two siblings, a sister and a brother. Later, she came to Bengaluru and was staying in Doddagubbi in a residence called Aishwarya Nilaya.

Her B Money alias is her code name in the business and also her social media account username. Anika deals with clients via WhatsApp and Telegram. Her code name for pink MDMA is Red Bull while for LSD it is Love Dose. She reportedly supplied drugs to students as well as Sandalwood actors and music directors, but without meeting anyone.

Her associates, Kochi-based Anoop and Chennai- based Ravichandran, would receive drugs from her, conceal them in soft toys, and courier them or send them to clients’ post boxes.

Anika also had a Nigerian link in Bengaluru, especially one Nigerian peddler going under the code name of Tam Tam who resided in Horamavu.

She reportedly told the investigators that she recently purchased 250 MDMA tablets for Rs 550 each, and her conversation with Tam Tam has been recorded by the NCB. Anika said Tam Tam brought drugs to Bengalure from abroad through the dark web.

‘Inspired’ by Tam Tam, Anika came to Bengaluru and got a job in a private company. She was introduced to Andy Jumbo, whose front is a clothings export business, and the duo later married.  Jumbo is in jail for assaulting the police in a drunken state.

In the meantime, Anika was introduced to Aminam Khan Mohammed and started dealing through him. She is linked to 18 peddlers across the city, especially one Dugay Dunzo who is absconding.

On August 21, Anika was waiting for a contact at the Sadahalli Gate in a rented Zoom car when she was nabbed by NCB officials.  The sleuths searched her home and seized a stash of MDMA tablets.  A case has been registered against her under sections 22, 27 (a), 28, 29 and R/W 8 of the NDPS Act.