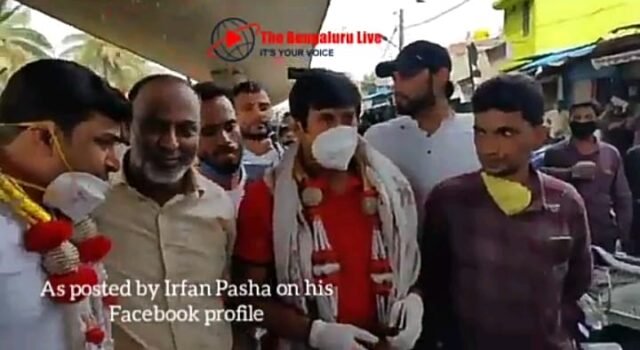 Instead of going into home quarantine right away, Pasha chooses to mingle with supporters

JDS corporator from Padarayanapura Imran Pasha was arrested on Sunday for violating Covid-19 lockdown norms in a containment zone.

Pasha was discharged from Victoria Hospital, where he had been admitted after he tested positive for the coronavirus, and was instructed to be in home quarantine for 14 days. Instead, he moved along with his supporters, who gave him a grand welcome by bursting crackers, and without anyone maintaining social distancing or adhering to lockdown norms. (watch video)

The entire Padarayanapura ward has been sealed and declared a containment zone. Pasha was arrested under the Disaster Management Act, 2005 as well as under IPC sections 143, 188, 270 and 271.

Bhaskar Rao, Commissioner of Police, told news agency ANI: “It was an irresponsible act of Imran Pasha. It was a criminal act as he did a roadshow in a place which is a containment zone. I saw the video of the roadshow, which was unacceptable. We will take further action after gathering all information.”

Announcing a specification for PHP