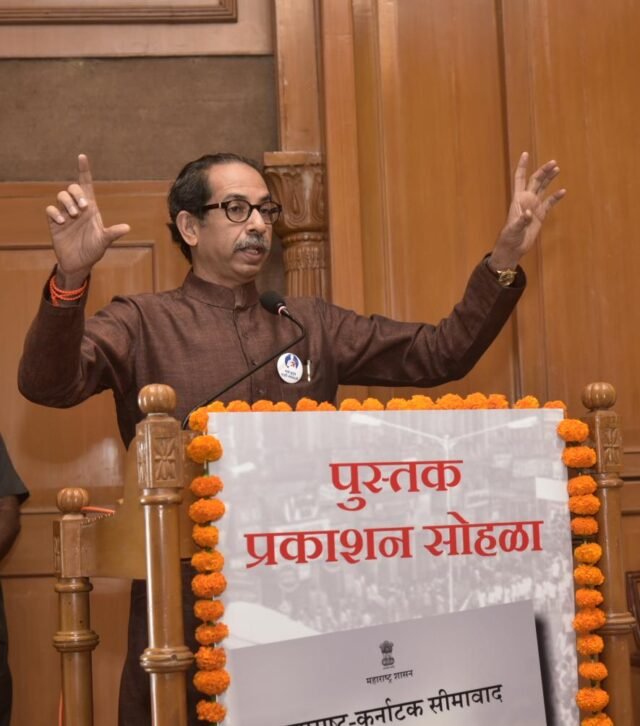 Maharashtra Chief Minister Uddhav Thackeray on Wednesday said areas dominated by Marathi- speaking people on the state’s border with Karnataka should be declared as a Union Territory till the Supreme Court gives its final verdict on the issue.

Speaking at the launch of a book on the boundary dispute between the two states, Thackeray lashed out at the Karnataka government over alleged atrocities on Marathi- speaking population in those areas, and said there is a need to fight to win the case for their inclusion in Maharashtra.

Maharashtra claims certain areas, including Belgaum, Karwar and Nippani which are part of Karnataka, contending the majority of population in these areas is Marathi-speaking.

The case over the dispute between the two states is pending before the Supreme Court for many years.

Thackeray said, “When the case is being heard in the Supreme Court, the Karnataka government renames Belgaum, declares it as its second capital, constructs a Legislature building and holds one legislature session there.”

He said the “Karnataka-occupied Marathi-speaking areas should be declared as a Union Territory” till the Supreme Court gives its final verdict.

“We have to learn from past experiences and fight to win. The Karnataka-occupied Marathi-speaking areas will be included in Maharashtra,” he asserted.

The chief minister also targeted the Maharashtra Ekikaran Samiti (MES) for allegedly disintegrating and weakening the Marathi cause for selfish political interests.

“Earlier, the MES won half-a-dozen MLAs, Belgaum mayor used to be a Marathi-speaking person. The Shiv Sena never entered the political fray in Belgaum because it did not want to weaken the MES,” he said.

Thackeray, whose party formed a Maha Vikas Aghadi (MVA) with the NCP and Congress to form government in 2019, said a time-bound action plan needs to be charted out to win the legal battle and ensure the Marathi- speaking leadership and people in those areas of Karnataka remain united.

“Let’s take a pledge that we will not rest till we win. If the long pending issue is not resolved during this (MVA) government’s tenure, it will never be,” he said.

“In Karnataka, whichever political party’s government or chief minister take charge, they have one thing in common – atrocities against Marathi people and language,” he charged.

Marathi people should also unite, he said, adding that “let us be determined to win”.

Speaking on the occasion, NCP president Sharad Pawar said the Mahajan Commission was set up (by the Centre in 1960s) to study and arrive at a conclusion when (Maharashtra leader) Senapati Bapat began his hunger strike.

“We (Maharashtra) rejected the commission’s findings. Barrister A R Antulay, the former CM, wrote a book dismissing the Mahajan Commission’s report. This book should find a mention in the new book (released on Wednesday),” he said.

Pawar said the Supreme Court is the “last weapon for the state” and Maharashtra should use all its legal acumen to win the case.

“We have to fight to win. There is no other option. It is good that Chief Minister Uddhav Thackeray is taking a lead in this direction. Maharashtra needs to sink its political differences and show more unity in this case,” he said.

Deepak Pawar said he has travelled from Bidar to Karwar (in Karnataka) and found that love for Marathi language and culture binds people from the border areas to Maharashtra.

“The need of the hour is to assure them that the state of Maharashtra is firmly behind them, and the MES should also be united to carry on the struggle,” he said.

The book, comprising articles and cartoons chronicalling the issue over the last 64 years, will help create an awareness about the issue among the new generation and bridge the disconnect between Marathi-speaking locals and other people in Maharashtra, Deshpande said.

“Political and social mobilisation is the need of the hour to ensure Marathi language and culture thrive in these areas,” he said.

Karnataka Chief Minister B S Yediyurappa recently slammed Thackeray’s comments wherein the latter said his government is committed towards incorporating into Maharashtra the areas of Karnataka where Marathi-speaking people are in majority. PTI