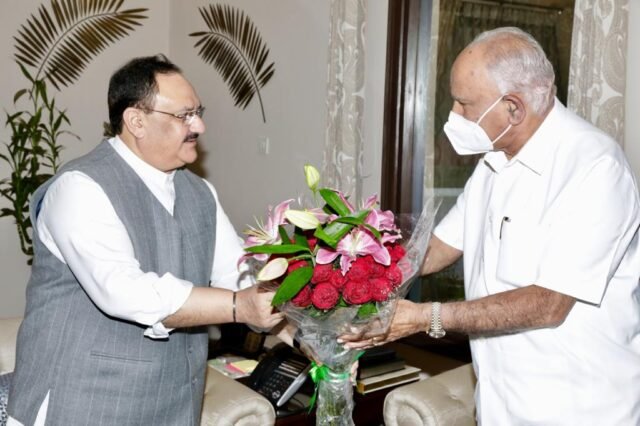 A decision on expansion of the Karnataka cabinet will be taken in the next two-three days, Chief Minister BS Yediyurappa said after meeting BJP national president JP Nadda in Delhi on Wednesday.

Yediyurappa, along with Deputy Chief Minister Govind Karjol, met Nadda in the national capital and explained to him the need to accommodate new faces in the cabinet.

“I have informed (Nadda) about the need to undertake at the earliest the cabinet expansion to accommodate new faces. He (Nadda) said (he) will discuss the issue and get back in the next two-three days,” Yediyurappa told reporters after the meeting.

The chief minister further said he also discussed the issue of development of the state with the party chief.

Nadda informed Yediyurappa that he would visit Karnataka next month as part of his countrywide tour.

Asked if it would be cabinet expansion or reshuffle, Mr Yediyurappa said, “It will depend on the direction given by Naddaji.”

Political activity has intensified within the ruling BJP camp in the state ever since Yediyurappa indicated on November 10 soon after the party’s victory in bypolls to two assembly constituencies that cabinet reshuffle is on cards.

The chief minister had said he would soon be proceeding to New Delhi to discuss with the party’s central leadership and get their approval, as he hinted about reshuffle by dropping or inducting some ministers.

The cabinet reshuffle is expected to be a tightrope walk for Mr Yediyurappa, considering that there are too many aspirants.

While several of the old guards like eight-time MLA Umesh Katti are waiting for a chance to be inducted into the ministry, Congress-JD(S) rebels like AH Vishwanath, R Shankar and M T B Nagaraj, who helped the BJP return to power and are now party MLCs, are also aspiring for slots.

As per the agreement, Yediyurappa would also have to keep space for Munirathna following his win from Rajarajeshwari Nagar seat in the bypoll, also for Pratap Gowda Patil who needs to win the Maski bypoll that is yet to be announced.

The cabinet currently has 27 members, and seven berths are still vacant.

‘Empty’ Covid centres in city may be closed