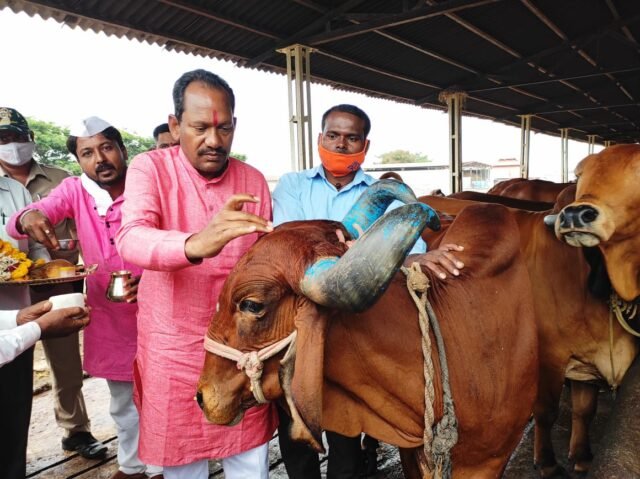 To encourage the adoption of cattle from goshalas by public and private organisations in Karnataka, the state government is going to launch a cow adoption scheme on July 28, said Karnataka Animal Husbandry Minister Prabhu Bhamla Chavan on Saturday.

Speaking to mediapersons, Chavan said, “Our government is keen to start “Punyakoti Dattu Yojana” for the first time in the country to encourage adoption by public and private organisations for the purpose of nurturing and rearing the cattle in cow sheds to preserve the herd. Basavaraja Bommai will complete one year as the Chief Minister on July 28 and the dedication ceremony will be held on the same day.”

He said cattle are sheltered in more than 215 private goshalas in the state. “100 government goshalas are being started gradually and in all these Goshalas domestic and crossbred cattle, needy, exhausted, old, diseased, abandoned by farmers, male calves and cattle seized by court and police custody are being sheltered and nurtured,” the Minister said.

He explained that the objective of this project is to motivate the public to provide more facilities to the cattle in the goshalas and conserve goshalas to make the goshalas financially viable. He said goshalas will be run with the cooperation of the people. Chavan appealed to the people to adopt cattle under the cattle adoption scheme by paying Rs 11,000 per cattle per annum from any Goshalas in Punyakoti Adoption Portal.

He said that under the FEED A COW scheme, people have been allowed to feed as many cows as they want for Rs 70 per day at any of the cowsheds in the Punyakoti Dattu Portal on special occasions (birthdays, wedding anniversaries, etc). He said that under the donation scheme for goshalas, the public can donate at least Rs 10 to any of the goshalas in Punyakoti Adoption Portal as per their ability for infrastructure and other expenses.

Chavan appealed to people to adopt the cattle in the government and private cowsheds in the state from and save the cow population. (ANI)