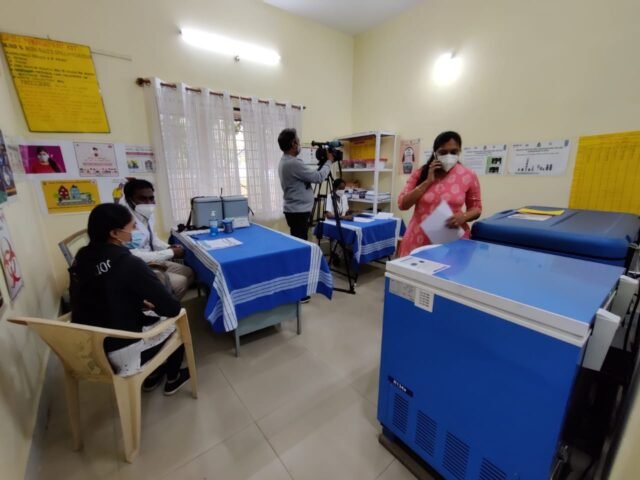 Karnataka has planned to conduct COVID-19 vaccination dry run at a total of 263 different health facilities across the state on January 8, Health Minister K Sudhakar said on Thursday.

Speaking to reporters after attending a video conference by Union Health Minister Dr Harshvardhan, he said, at the meeting preparations by the states and assistance by the Centre for the vaccination programme were deliberated in detail, also regarding the dry run tomorrow.

Harshvardhan on Thursday chaired a video conference of health ministers of all states regarding the Covid-19 vaccination dry run that will be conducted in all districts of the country on Friday.

Dry run, an exercise for end-to-end testing of COVID- 19 vaccination process was held in five districts of Karnataka namely, Bengaluru (including BBMP), Belagavi, Kalburgi, Mysore and Shivamogga on January 2 as per the government of India guidelines.

Stating that 6.30 lakh healthcare workers serving in both government and private sector have registered for vaccination in the state and the window for registration is still open, Sudhakar said, one crore vaccines will be administered initially across the country, they will include health, police personnel and defence personnel, and all those involved in COVID control duties.

He said the vaccination should be a public movement with public participation, while pointing out that the union minister has said there was no danger from the vaccine and it was safe.

Noting that the Centre has so far supplied 24 lakh 0.5 ml syringes to the state and they have been distributed among the districts, Sudhakar said, we already have cold chain equipment like 10 walk-in coolers, four walk-in freezers, 3,201 ice line refrigerators (ILR), 3,039 deep freezers, 3,312 cold boxes and 46,591 vaccine carriers and and 2,25,749 ice packs.

The Central government has also provided 64 Large ILRs with the capacity of 225 litres each, also 2 walk-in coolers and 1 walk-in freezer will be received from the centre, he added.

Earlier in the day speaking to reporters, Sudhakar said, according to information a total 117 people who have returned from the UK to the state – 112 in Bengaluru and five in other districts- are yet to be traced and efforts were on in this regard.

He said, Home, Health, Bruhat Bengaluru Mahanagara Palike, Urban Development department officials in Bengaluru and across the state have been working honestly to trace them and added that the government was not hiding any numbers.

‘Many of them (yet to be traced) hold foreign passports,’ he said, adding that also more than 1,000 people who have come (the UK to state’s airports) are from other states and those states have been informed to trace and do necessary testing.

Noting that so far 2,523 people who have come from the UK have undergone tests, the Minister said, including 40 returnees and 25 of their contacts so far a total of 65 people had tested COVID positive during RT-PCR test.

Among the 65 people, 10 have been confirmed with infection by UK strain after genomic sequencing tests and they are undergoing treatment. PTI