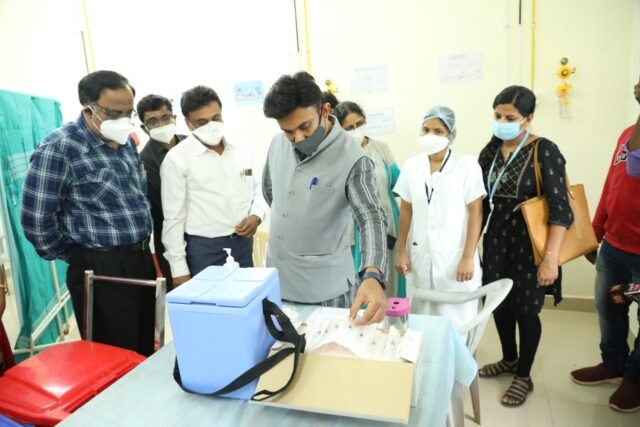 Dry run, an exercise for end-to- end testing of the COVID-19 vaccination process, was held “smoothly” in five districts of Karnataka on Saturday.

It was held at Kalaburagi, Shivamogga, Mysuru, Belagavi, and Bengaluru districts in which 25 beneficiaries, including designated health staff at each of the identified Primary Health Centres, taluk and district hospitals, participated.

Officials said that everything needed to conduct Covid-19 vaccination, excluding the actual vaccine shots, were part of the dry run.

Health Minister K Sudhakar told reporters after visiting the General Hospital at Yelahanka where the dry run was held, that everything went off smoothly as per protocol and the state is prepared for the actual process, once it gets the vaccine.

“Once we get the vaccines officially, a similar procedure will be followed and we will try to vaccinate as many people as possible in a single day,” he said.

The vaccine is expected this month itself, the Minister said and noted that the Union Health Minister had said the Centre would administer it free of cost initially to one crore workers in the health sector.

The centre will issue guidelines on administering the vaccine for other sections in stages and the state government will implement it, he added.

Around 100 vaccinators and 375 beneficiaries were said to be part of the dry run in the state, official sources said. The Health Department in a release had earlier said that three session sites in each district — one at district level, one at taluka level and one at PHC level — have been chosen for the dry run, after which feedback would be collected from those session sites. PTI

Cow slaughter a sin, BJP committed to banning it: Sudhakar