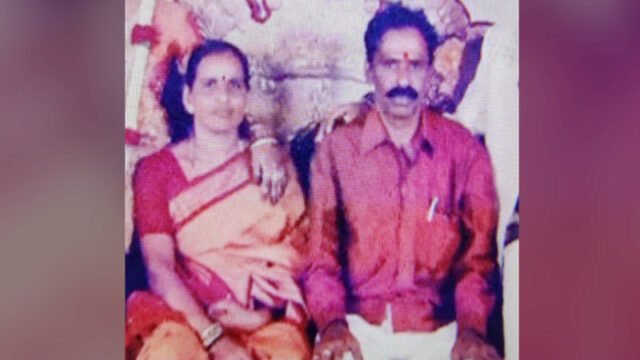 The brutal double murder of a retired RBI employee and his wife on Sunday was cracked within 24 hours with the arrest of the accused.

Govindappa, 65, and his wife Shanthamma were found stabbed to death at their home in RBI Layout, JP Nagar, sometime after their son stepped out for an errand. The murder came to light only after the son informed the cops about the incident.

Govindappa was  a retired RBI  employee and Naveen is a software engineer. The cops first suspected a property dispute as the reason for the crime.

In his complaint, Naveen said he married Pavithra in 2008, but they separateddue to differences. They reconciled later but Pavithra and her brother Rakesh continued to hold a grudge against Naveen.

However, after the DCP visited the crime scene, another lead came up.

Upon investigation, It was found that Rakesh and Naveen had a telephonic conversation on Sunday at 7 pm, in which Naveen demanded that Rakesh drop his wife back home and Rakesh warned of ‘doing something’ to the aged couple.

It was found that Rakesh came to the house  between 7.30 pm and 8.45 pm while Naveen was away, stabbed Govindappa and Shanthamma fatally and fled the spot.

Thus, within 24 hours of the double murder, the  police team under the guidance of  DCP Rohini Katoch, ACP Manjunath Babu and Police Inspector T M Dharamendra solved the case.

The accused has been sent to judicial custody and a case has been registered under IPC 302 and 506 in the Konanakunte police station.