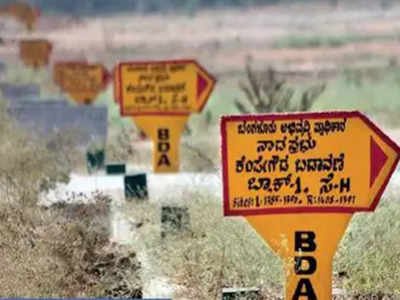 A conman who cheated scores of people by giving them fake BDA Kempegowda Layout site letters was nabbed by the police on Thursday.

The accused, Vijayananda Swamy, had started his own ‘Uttara Karnataka Regional Farmers’ Association’ with an office in Chamarajapet. On interrogation, he said 3,000 persons were registered with his ‘association’. More than 50 persons were issued ‘allotment’ letters with the forged signature of the BDA Commissioner. He allegedly demanded Rs. 50,000 to Rs. 3 lakh per plot.

The scam came to light when a customer who had paid him Rs. 3 lakh and had received ‘agreements’ for 6 plots visIted the BDA office to enquire into the property deeds. The Deputy Secretary-I alerted BDA Commissioner HR Mahadev, who asked BDA’s Superintendent of Police Shivakumar Gunare to investigate the matter.

BDA has said all those who have been cheated can file a complaint at the Seshadripuram police station, which is now handling the case.

Vijayadashami rituals held in low key due to Covid scare

Actress says she was raped, blackmailed