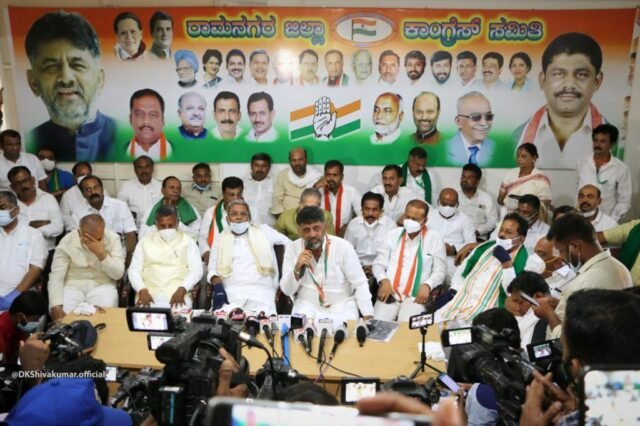 With limited options before it amid surging COVID cases, government prohibiting movement, and High Court observations, the Karnataka Congress on Thursday decided to temporarily halt its padayatra demanding the implementation of Mekedatu project, across river Cauvery.

Asserting that the decision to halt the padayatra was taken in the interest of public health and not fearing cases or BJP government’s orders prohibiting it, the party said it will continue the march once the COVID third wave declines and the curbs are relaxed.

The decision to call off the padayatra that was being undertaken, despite COVID curbs restricting such activities, was taken at a meeting of senior Congress leaders at the party office in Ramanagara, and the high command was also reportedly consulted in this connection.

”We are concerned about the health of the people in Karnataka, it is our responsibility to see to it that the COVID doesn’t spread because of our padayatra. Despite taking all the necessary measures we had concerns, so we discussed today. We don’t want people to feel that we are responsible for worsening COVID situation,” Siddaramaiah said.

The decision to go on a Padayatre was taken before Assembly Session, when #Covid19 3rd wave had not yet begun.

Now that the number of cases have crossed 15,000 in Bengaluru alone, we have taken the decision to end in the interest of people.

Speaking to reporters here after meeting, he noted that the padayatra was to reach Bengaluru by tomorrow evening, where COVID cases are high.

”…so we have decided to temporarily halt this padayatra here. Once the third wave declines and COVID-19 rules are relaxed, we will continue the remaining distance of the padayatra from Ramanagara,” he said, as he appealed to party workers not to lose spirit and requested their cooperation.

The Congress’ decision to halt the padayatra is following the High Court’s strong observations and government’s Wednesday night orders prohibiting inter-district and intra-district (within Ramanagara) movement of vehicles and persons for participating in it.

.@BJP4Karnataka govt was always interested in covering up their failure in #Covid19 mgmt by pointing fingers at the opposition.

It has failed both politically & administratively to ensure justice to the victims of #Covid19.

Also, several party leaders including Leader of Opposition in Rajya Sabha Mallikarjun Kharge and former Union Minister Veerappa Moily, who had attended the inaugural of the padayatra on January 9, have tested positive for COVID.

The Karnataka High Court on Wednesday had questioned the state government as to why it allowed the Congress’ padayatra, which is being held in violation of its COVID curbs, and why no appropriate action was taken by the authorities to restrain the march.

It has also asked the Karnataka Pradesh Congress Committee (KPCC) whether it had obtained permission for the padayatra and whether measures have been taken in compliance with Standard Operating Procedures (SOPs) prescribed by the government to prevent the COVID-19 spread.

.@BJP4Karnataka MLAs Renukacharya & Subhash Guttedar had organised a huge protest. But there was no case filed against them.

Why were the cases filed only against @INCKarnataka leaders?

People already know answer for this – it is to take away Mekedatu from Kannadigas.

The court has asked both the state government as well as the Congress to respond by Friday.

Earlier on Thursday, Chief Minister Basavaraj Bommai had appealed to Siddaramaiah and KPCC President D K Shivakumar to call off their padyatra.

Shivakumar said the Congress has taken the decision to halt the padayatra after gathering public opinion through party legislators.

Noting that the court has not asked Congress to stop the march, but has made certain observations based on today’s situation, he said, ”we respect the sentiments expressed by the court.” Amid restrictions by the government, there were plans that only he and Siddaramaiah would continue with the march to keep the commitment, Shivakumar said, but the plan was dropped, as large number of people would still gather, and that they were not bothered by cases booked against them or threats of any arrest.

The Congress’ 11-day long march demanding implementation of the Mekedatu project, to which neighbouring Tamil Nadu is opposed to, on its fifth day today, was scheduled to cover a distance of about 15 km from Ramanagara to Bidadi.

The padayatra with the theme ‘Namma Neeru Namma Hakku’ (Our water, Our right) that began at Sangama, the confluence of Cauvery and Arkavathi rivers at Kanakapura in Ramanagara district, on January 9, was to span a total distance of nearly 139 km, and was scheduled to conclude at Basavanagudi in Bengaluru on January 19.

Holding the ruling BJP responsible for COVID spread in the state, Siddaramaiah said several BJP leaders including Chief Ministers have taken part in large scale meetings or events, but no case was booked against them, while ”false cases” have been booked against Congress leaders.

”This government is not taking impartial measures to stop the virus spread and they had a malintent of scuttling our padayatra, that is why they issued daily orders and notices,” he said, adding surge in cases is not because of the march, but it was a natural spread due to COVID third wave world wide.

The Congress, however, considers the 4-day march to be a success.

Police have already filed four FIRs against Congress leaders including Shivakumar and Siddaramaiah, for taking out the march defying COVID-19 curbs.

Though the padayatra was projected as apolitical, demanding the implementation of Mekedatu project, it was seen as Congress’ attempt to mobilise its cadres and consolidate its voter base in the old Mysuru region, which is a Vokkaliga bastion, where JD(S) is its traditional rival, and the ruling BJP is attempting to make inroads, ahead of 2023 assembly polls.

Several Congress functionaries believed that it was an attempt by Shivakumar, the man behind this march, ahead of assembly polls, to assert his Chief Ministerial ambitions, for which Siddaramaiah is also a strong contender. The party has seen several incidents of political one-upmanship between the two leaders last year.

Both ruling BJP and JD(S) had hit out at Congress calling its march as a ”political stunt” ahead of the assembly election next year.

The Mekedatu multipurpose (drinking and power) project involves building a balancing reservoir near Kanakapura in Ramanagara district of Karnataka.

The project once completed is aimed at ensuring drinking water to Bengaluru and neighbouring areas (4.75 TMC) and also can generate 400 MW power, and the estimated cost of the project is Rs 9,000 crore. PTI