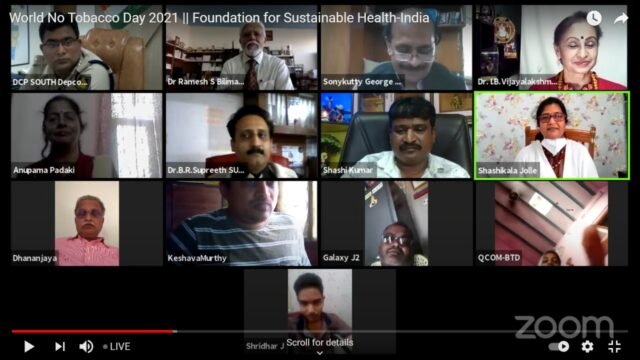 As part of ‘World No Tobacco Day’ 2021, children, parents, teachers and public health experts pledged to build a ‘Tobacco-Free Generation’. They handed over a memorandum suggesting measures towards this objective to Woman and Child Welfare Minister Shashikala Jolle on May 31.

The campaign is promoted by the World Health Organisation (WHO) across member-states, including India. India has the second largest number (268 million) of tobacco users globally, and of these 13 lakh die every year from tobacco-related diseases. Nearly 27% of all cancers in India are due to tobacco. According to the Global Youth Tobacco Survey (GYTS), a whopping 14.6 per cent of youths aged 13-15 years in India use tobacco.

In the May 31 webinar, ‘Voices for Tobacco-Free Generation’, organized by Consortium for Tobacco-Free Karnataka as part of the ‘World No Tobacco Day’ 2021, Sapna HM, a college student, said, “In the current situation, tobacco products are sold to anyone and anywhere. One of the significant steps towards building a tobacco-free generation is to first ensure that tobacco products are not available to children. This can be done through vendor licensing.”

Woman and Child Welfare Minister Shashikala Jolle, who took part in the webinar, said “Tobacco is one of the very few products that kills its users. Glamourising tobacco through movies and advertisements has a lot of influence on children. Our government will consider the recommendations in the memorandum to curb tobacco usage.” She added, “Children are prone to learn from their atmosphere. Tobacco usage should stop from homes. Children, parents and teachers have a big role to play in curbing tobacco consumption.”

Some of the recommendations in the memorandum submitted to the government are:

•Restrict easy access to tobacco products to children through the introduction of vendor licensing.

•Include harmful effects of tobacco and the laws pertaining to it in the curricula.

•Impose a ban on hookah bars as they attract children with different flavours.

•Ban the manufacture and sale of chewing tobacco and take measures to promote alternative cropping for tobacco farmers.

SJ Chander, Convenor, Consortium for Tobacco-Free Karnataka (CFTFK), said, “Tobacco has an addictive influence on minors. Children can be easily influenced and that is why they are the main target of the tobacco industry. Access to tobacco should be restricted for minors.”

Railway station near Bengaluru airport to be operationalised shortly