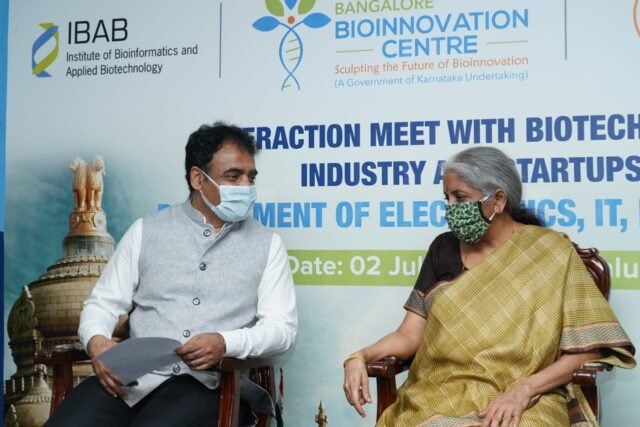 Assuring more Central co-operation for development of biosciences and biotechnology in Karnataka, Union Finance Minister Nirmala Sitharaman said the Centre is focused on the interface of science, business and entrepreneurship to better the living standards of the common man.

Addressing stakeholders of the biotechnology industry and start-up leaders as chief guest in an interaction organized by the Department of IT/BT and S&T on Friday, she said the Centre has given priority to creating synergies between various departments which are involved in scientific research.

Noting that biological sciences are the foundation of any scientific achievement, she commended the efforts of Karnataka in creating a suitable ecosystem for biosciences and biotechnology.

Deputy CM Dr CN Ashwath Narayan, who is also Minister for IT/BT and S&T, said Karnataka is not only the IT capital but also the BT capital of India, while Bengaluru is considered the country’s chief biotechnology hub and an innovation centre in the areas of enzymes, biopharma, bioinformatics, plant genetics, genomics and bioprocessing.

Bio-entrepreneurship is pitched to be one of the key drivers of job creation, improved productivity, increased prosperity and a better quality of life, Narayan noted, and added that the focus on biotechnology in the startup ecosystem of Karnataka has sharpened in the wake of the Covid-19 pandemic.

The government will soon launch Karnataka Innovation Vision 2030 in collaboration with Institute for Competitiveness (IFC), he said.