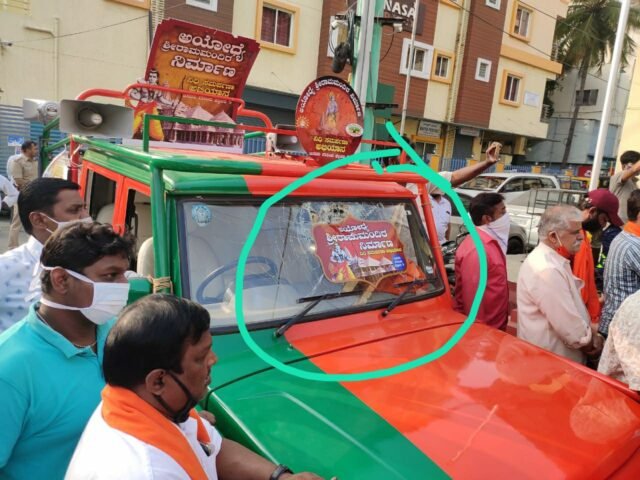 At a time when Indians have by and large opened their purse strings for the construction of the Ram Mandir in Ayodhya, a shocking incident in a minority-dominated locality in Bengaluru has left a bad taste in people’s mouths.

The Muslim-dominated locality of Bismillah Nagar in Gurappanapalya made news for all the wrong reasons when five youths, reportedly under the influence of ganja, attacked three BJP workers who were on a funds collection drive in South Bengaluru — the constituency represented by young Hindu leader and BJP member of Parliament Tejasvi Surya.

Following the incident on Friday, BJP partymen led by Bengaluru South president NR Ramesh protested against the attack on its workers.

As per the BJP leaders, volunteers and other BJP workers were collecting donations for the construction of the Ram Mandir in Ayodhya, when the situation went out of control after five Muslim youths hurled stones at a party vehicle and hit a poster depicting Lord Ram with footwear.

The Suddaguntepalya cops rushed to the spot and took the five youths into custody. The police later filed an FIR after BJP leaders staged a protest.

It is reported that the Muslim youths had complained about the ‘loud music’ played by the BJP volunteers, after which matters took an ugly turn.

…but most Muslim residents donated wholeheartedly

Speaking to TheBengaluruLive, NR Ramesh said the BJP condemned the incident, adding that “our workers got instigated and became angry only after the Muslim youths hit the poster of Lord Ram with footwear.”

Ramesh claimed that despite the ugly incident, Muslims of the locality donated wholeheartedly for the Ram Temple. “We had coupons for Rs 10, Rs 100 and even Rs 1,000. Not a single Muslim house in Bismillah Nagar opposed the donation drive, apart from the five youths, who were under the influence of ganja,” he said.