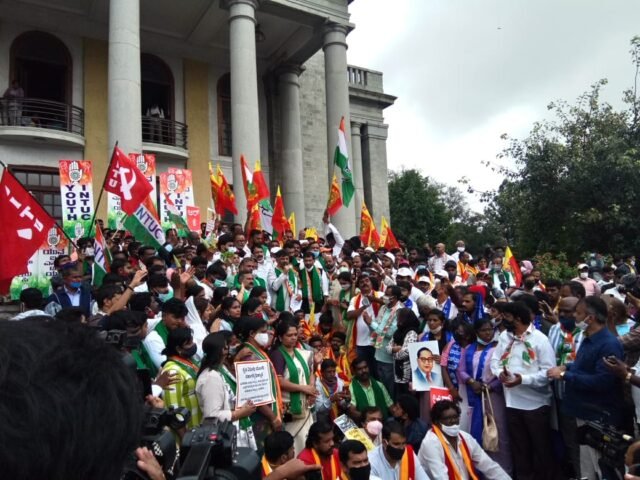 Normal life was affected in parts of Karnataka as farmers and workers hit the roads on Tuesday as part of nation-wide Bharat bandh called by various unions and political parties protesting the farm and labour laws recently introduced by the Centre.

Many organisations in the state have come in support of the bandh called by the Karnataka Rajya Raitha Sangha and Hasiru Sene (Green Brigade) against the agri laws passed by the central government allowing anyone from any part of the country to purchase the agriculture produce.

Chief Minister B S Yediyurappa termed the strike as a ”failure”. In the state, the farmers are also protesting the Karnataka Land Reforms (Amendment) Act allowing anyone to purchase agriculture land directly from the farmers. Earlier, people from the agriculture background were allowed to purchase farmland.

The protesters alleged that these laws would lead to hoarding and turning the agriculture industry into a real estate sector. Many trade unions too have joined hands with the farmers to protest the reforms in labour laws, claiming that it was against their interest. Besides the Indian National Congress, left parties such as CPI, CPI(M) and their allied organisations too have extended their support to the stir.

Some pro-Kannada organisations such as Kannada Chalavali Vatal Paksha of Vatal Nagaraj too backed the shutdown. As rallies, demonstrations and sit-in protests marked the day in urban areas, shops remained shut, city buses came to a halt and there was less vehicular movement.

Demonstrations, rallies and protest marches took place in Bengaluru, Mysuru, Belagavi, Hubballi-Dharwad, Raichur, Tumakuru, Mangaluru, Bidar, Vijayapura, Hassan, Chikkamagaluru, Chamarajanagar, Koppal, Kolar, Chikkaballapura and other places. While most of the shops remained shut, in some places the shopkeepers tried to commence their business of the day.

However, the protesters appealed to them to keep their establishments shut in support of the farmers, which they obliged. In certain areas, the agitators forced the shopkeepers to keep their shops closed. In the state capital, the demonstrations took place at the Town Hall and the Mysuru Bank Circle.

The Congress leaders led by former Chief Minister Siddaramaiah, D K Shivakumar and former minister B Z Zameer Ahmed Khan staged a sit-in in the city near the Mahatma Gandhi statue at Mourya circle. Speaking to reporters in Bengaluru, Congress state unit chief Shivakumar claimed that the bandh has been a ”success” despite the government’s attempt to thwart it using force. “We are supporting this movement because the government wants to make the farmer slaves through these farming laws,” he alleged. Siddaramaiah accused the government of ”failing” to address the concerns of the farmers.

In view of the protest, police diverted the traffic leading to the Kempe Gowda road here. Passengers had a harrowing time as buses did not ply from Majestic, the Central bus terminus and were left stranded.

Karnataka Rajya Raitha Sangha president Kodihalli Chandrashekhar said demonstrations have been taking place all over the state where the important roads and highways have been blocked, shops have been shut and business has come to a halt. “We will block the highways. We have requested everyone to support us because the Centre and the state are going against the farming community,” he told the media in Bengaluru. He added that the farmers under the banner of his organisation planned to lay siege to Vidhana Soudha on Wednesday.

In Mysuru, the ever bustling Devaraj Market and Ashok Road wore a deserted look as demonstrators forced the shopkeepers to keep the shops shut.

Meanwhile, Chief Minister Yediyurappa termed the strike as a ”failure” across the country. “It is not appropriate to organise a bandh for political gains. Already the bandh has failed across India as no one is supporting it,” he told reporters in Bengaluru.

Underlining that the BJP governments at the Centre and state are ”pro-farmer” and took decisions in favour of the agrarian community, Yediyurappa appealed to people not to heed to the bandh call and continue their business as usual.

In the wake of Bandh, adequate security measures were taken in places across the state where the demonstrations were like. According to police sources, about 125 platoons of Karnataka State Reserve Police (KSRP), 5,000 home guards, Central Armed Reserve (CAR) and District Armed Reserve (DAR) platoons have been deployed. The Superintendents of Police have been entrusted with the responsibility of bandobust in their respective districts. PTI

Diganth does a turn as ‘real’ hero