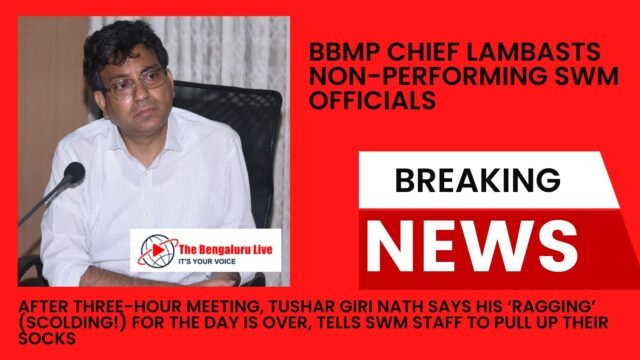 After three-hour meeting, Tushar Giri Nath says his ‘ragging’ (scolding!) for the day is over, tells SWM staff to pull up their socks

Solid Waste Management officials of BBMP were hauled over the coals on Saturday by new Chief Commissioner Tushar Giri Nath for non-implementation of several garbage-related projects which could have helped Bengaluru score some brownie points in the ‘Swachh Bharat Survekshan’ rankings for urban local bodies.

Giri Nath, who chaired a three-hour meeting on a second Saturday, vented his anger at SWM officials for keeping him in the dark on the status of garbage-related projects.

The Chief Commissioner expressed surprise at being denied relevant information on the SWM projects. When the officials submitted that many tenders pertaining to SWM had been turned down by the Urban Development Department, Giri Nath reportedly retorted bluntly, “I do not want any excuses. I want to see progress and nothing has been done for more than one-and-a-half years. What steps were taken to coordinate with the Urban Development Department on those tenders which were rejected? What steps were taken to get them to rectify (the issues)? Why is there so much lethargy? What are the seniors doing?”

Not just that, the Chief Commissioner was also surprised to learn that SWM officials had not informed him about landfill sites that are closed, at a time when Bengaluru is finding it difficult to dispose of its garbage.

The SWM team attending the meeting was stunned when Giri Nath said the Hulahalli landfill site had been shut after a stay was obtained by a nearby school. “Why have officials failed to update the court on the facts and why have officials failed to file a caveat?” was his poser to them. He further quizzed them on “why the SWM team has failed to get a clearance from the Karnataka State Pollution Control Board to start other landfill sites in place of those which were closed for not having a clearance certificate”, and warned the officials that “such lethargy will not be accepted.”

‘Lax BSWML officials will be shunted out’

Sources close to the Chief Commissioner told TheBengaluruLive that the new civic chief expressed his displeasure over the performance of Bangalore Solid Waste Management Limited (BSWML), which has hardly taken off in the last couple of months.

Giri Nath reportedly said that the objective behind the company’s formation needs to be achieved, adding that non-performing officials would be shunted out and new officials having ‘experience’ in handling the city’s waste would be inducted into the team.

Govt to regularise ‘B Kharab’ land in Bengaluru

Nurse gets to hug her baby…after 21 days